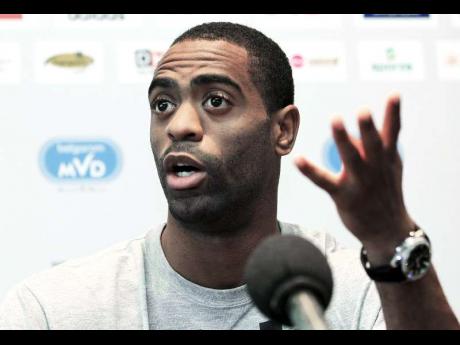 US athlete Tyson Gay, gestures as he addresses the media ahead of an IAAF Diamond League track and field meet. - Photo courtesy of IAAF 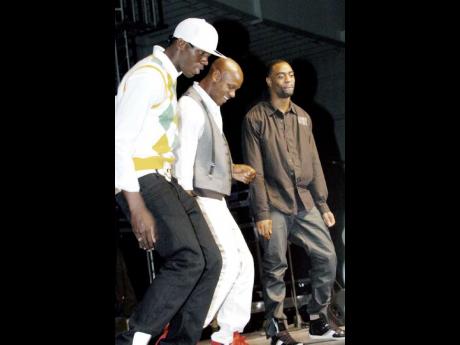 From left: Usain Bolt, Asafa Powell and American sprinter Tyson Gay, attempting to show off their dancing skills at 'A Night On Tracks', featuring Asafa Powell and Friends in concert, held at the National Indoor Sports Centre, on Sunday, December 20, 2009. - File 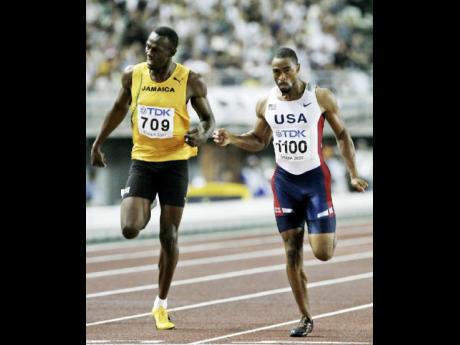 Tyson Gay (right) winning the 200-metre gold ahead of Usain Bolt at the 2007 World Championships in Osaka, Japan. - File 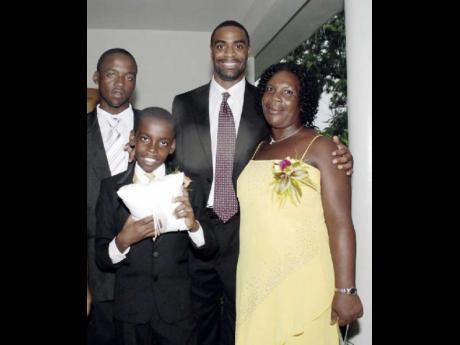 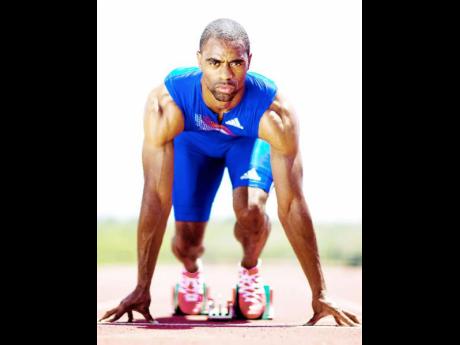 Jamaicans, American sprinting superstar Tyson Gay is perhaps the most liked non-Jamaican track and field athlete there is. Maybe it's his Jamaican-esque 'never-say-die' attitude, but while we don't want him beating up on our own, we certainly don't mind seeing him on the podium - even if we can't say the same for some of his countrymen.

Tyson himself is a big fan of Jamaica and close friend to some of the island's very own track stars.

The 2007 World Championships 100m and 200m gold medallist and joint second fastest man on the planet (9.69 seconds) took some time out to talk to us about his life, his ambitions and of course his rivals.

André Lowe (AL): OkTyson, thanks for joining us. Why don't you start by telling us a bit about your early days growing up in Lexington, Kentucky.

Tyson Gay (TG): Igrew up close to family in Lexington so that was home for me andIstill enjoy going back to visit my family and friends there.

AL: How and when did you get involved with athletics?

TG: When I was a kid,Igot involved in sports like most kids. I've told this story before but my mom used to send me and my sister outside after school to run up and down the hills around our house. Iguess those were my first races and my sister always won. It took me till around 14 years old to finally catch her.

AL: Hahaha! Good thing you won't be facing her at the World Championships this year, but how is training coming along?

TG: Training is good.Ihave had a more normal training routine this year than the last three years (because of injuries). I have been enjoying the training here in Orlando.

AL: You are a top international star but do you believe that American track and field athletes get the sort of recognition they deserve at home, considering how Jamaicans worship their own?

TG: Probably not, but the sport has been good to me despite all the ups and downs. I think if you are doing sport to try and be famous, you are doing it for the wrong reasons. You have got to want to compete hard for yourself, your family, your country; not because of recognition, I don't think.

AL: Or maybe you should have just married a Jamaican and try out for the Jamaican team (Lol). Talking about Jamaica, you have been here a couple of times. What are your favourite memories and impressions?

TG: Good food, loyal fans who love their own athletes but who respect good performances no matter where you are from. Ilike the warm weather in Kingston as well.

AL: Compared to years gone by, do you believe that there is still a high rate of cheating in track and field?

TG: Yes, we can see that every year with someone who gets caught from some place in the world. There will always be people trying to take shortcuts but I hope and think there isn't a lot compared to the past. USADA and WADA are catching up with cheaters more and more.

AL: What are your top three most memorable races?

The 100m in London at the Olympics is memorable but not for the reasons I would have liked, LOL. So much time, emotion and focus were spent preparing byeveryone for that one. Not sure there will ever be another one like it.

AL: Certainly one of the great races of our time. On that note, you have had some great battles with the likes of Asafa Powell, Usain Bolt and Yohan Blake plus a number of your own countrymen over the years. Who is the greatest competitor that you have faced on the track?

TG: Those guys are all tough but hands down the greatest competitor Ihavefaced ismy sister. As I told you it took me 14 years to catch up with her.

AL: Ha - wormed your way out of that one huh (laughs). Anyway, sprint double at the 2007 World Championships, but would you trade those for an individual Olympic medal?

AL: You are the joint second fastest man on the planet with a 9.69 seconds 100m PB. Do you think that Usain Bolt's 9.58 is untouchable, or are you keeping an eye on it yourself?

TG: No, 9.58 is fast but not untouchable. Usain broke through mental barriers that sprinters had developed. I always thought faster was possible and he proved it was.

AL: Do you think that the Jamaica vs USA sprint rivalry helps athletics?

TG: Yes and no. Rivalries are always good no matter the sport. When I compete for my country, Iwant to do well for not just me but also for my country. Jamaicans are the same, I think, but the sport is more than just USA vs Jamaica. Ilike the focus on sprinting but there are other events too. Those distance people and fieldeventers need to get some love from the media too, you know.

AL: Fair enough ... Ok, so tell us, what is on your playlist before you step on the track?

TG: Ihave a mix of things that are all different depending on my mood and the kindof raceIhave coming up. It can be anything from Let's Get it Started by Black Eyed Peas, to gospel music, to Michael Jackson to Lil Wayne.

AL: I noticed you didn't mention any reggae music there but Ok. After battling back from injury, how disappointed were you after missing out on a 100m medal at the London Olympics?

TG: I'd be lying if I said I wasn't disappointed to come so close. But I was happy to be part of the relay-medal winning team.

AL: Let's talk a bit more about that injury. You of course had to undergo hip surgery, how difficult was that rehabilitation process and how has it affected you psychologically?

TG: Rehab was a long process. I basically had to learn to walk, then jog, then run and then sprint. It has made me more mature, Ithink, but while it was happening, it wasn't fun.

AL: If you could invite three athletes, past, present or future to dinner, who would those be and why?

TG: Jesse Owens for the way he handled himself, because he paved the way for others to come after him and I would like to hear what he thought of competing in front of Hitler.

For the present, Lebron James, Iwant to talk about the Heat and for the future, I'm not sure but there are a group of high-school kids in the US who run the high school dream 100m at the adidas Grand Prix in NYC. They are the best of our country's next generation. I would enjoy dinner with that whole group.

AL: Now to some other matters, honestly, what is your relationship like with Jamaica's top athletes, particularly Usain Bolt?

TG: Some peopleIam closer to than others. Nickel Ashmeade is an athleteof the future, is one of my trainingpartners and is a friend. I went to school with Veronica Campbell-Brown (Barton County Community College and Univer-sity of Arkansas) so she has been a friend for a long time. There are others that are friends as well, but whether Iam close or not with competitors, there is always respect.

AL: Ok, using USA and Jamaica athletes that competed at the London Olympics, give me your best 4x100m team.

AL: I think you have a future in politics (laughs). Now, if you were to retire today, how would you want to be remembered?

TG: Not sure, ask me again after 2016 andIpromiseIwill answer that one.

AL: Records or medals, which is more important to you and why?

There you go, big up yuhself Tyson and all the best ... well, not 'all-all' the best but you know what I mean (laughs).

"In the end, it's extra effort that
separates a winner from second place. But winning takes a lot more than
that, too. It starts with complete command of the fundamentals. Then it
takes desire, determination, discipline, and self-sacrifice. And
finally, it takes a great deal of love, fairness and respect for your
fellow man. Put all these together, and even if you don't win, how can
you lose?"