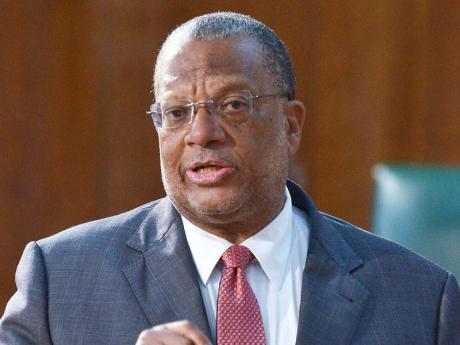 The Ministry of Finance and Planning has subdued its glee in reacting to the likelihood of an inked deal with the International Monetary Fund (IMF) by month end, which could result in a cumulative drawdown of around US$2 billion from the Fund, the Inter-American Development Bank (IDB), and the World Bank over the next four years.

"We are looking very good. Technically, there is an agreement, but in reality, we don't have it as yet," stressed a senior official from the ministry. "The fact is a formal agreement is very likely to come."

While Minister of Finance, Planning and the Public Service Dr Peter Phillips sat in a Cabinet meeting, word emerged from the IMF that after more than a year of deliberations, Jamaica was well on its way to securing a deal as the board would discuss the prior-actions requirements by the end of the month.

"Since the conclusion of a staff-level agreement with the Jamaican authorities in February on an economic programme that can be supported by the Fund, the authorities have submitted documentation to the IMF to confirm that all prior actions have been met," read the statement released to the media.

"The important thing now is to complete the reform programme and put the country firmly on the path of growth and job creation," Phillips told The Gleaner last evening.

The Gleaner reported a fortnight ago that the March month end approval deadline was being thwarted by discussions involving the IDB and the World Bank over whether more than US$750 million, announced by the IMF under a new extended fund facility, should be increased.

Word emerged yesterday that Fund management would submit to its executive board a 48-month arrangement under the extended fund facility (EFF) in the amount of SDR (Special Drawing Rights) 615 million (about US$958 million, or 225 per cent of quota), with the recommendation that it be approved.

"In addition, the Fund has engaged with the authorities and its development partners on the financing for the programme, including through important contributions from the IDB and the World Bank," the IMF release stated.

This was corroborated by the World Bank and the IDB, which, in a joint release, stated that they had acknowledged the decision by the IMF to present the proposal for a new extended fund facility to its board.

"This is an important reflection of that institution's confidence in Jamaica's macroeconomic stabilisation programme," the joint release stated.

The two multilaterals praised the Jamaican Government for its move to secure the agreement.

"Jamaica has taken the bold decision to tackle the structural impediments to growth that have hindered its development for decades."

The joint release stated that pending approval by their respective boards of directors, the World Bank and the IDB have each preliminarily allocated US$510 million in financing over the next four years. This, they said, supplements the support provided by the IMF.

The two multilateral institutions stated that they stood ready to assist the Government in its efforts to bring about sustained growth.

However, ministry sources have warned that anticipating a date for a drawdown from the IMF before the agreement is signed would be premature.

"That timetable is entirely separate. That will take place as part of the discussions at the executive committee level, but it is still too early to say," a ministry official said.

The IMF said it welcomed the progress that had been made in the implementation of the programme so far, including the authorities' efforts to complete the prior actions and structural benchmarks and the assembling of a financing package.

"It is expected that the board meeting will take place by the end of April," the IMF said.

The Fund said the success of this programme crucially depends on full and timely policy implementation by Jamaica of a coordinated set of reforms to strengthen public finances, restore debt sustainability, enhance growth, and bolster the resilience of the financial sector.

"Recognising the sacrifice involved for the Jamaican people, the strategy also aims to minimise the impact on the poorest and most vulnerable," the IMF said.