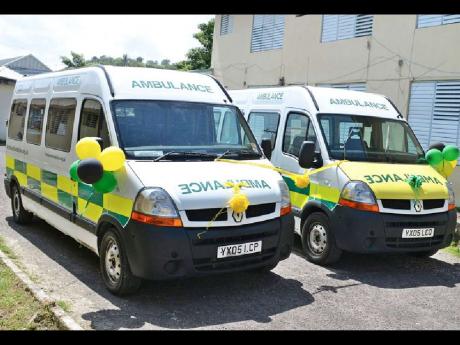 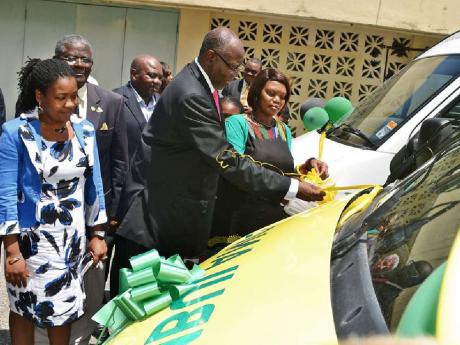 A NEAR-DEATH experience in 2011, when two children, on holiday in St Ann with their mother nearly drowned, has resulted in benefits to the St Ann's Bay Regional Hospital (SABRH) a year and a half later.

On Tuesday, Angelia Christian of the United Kingdom (UK)-based Angel Foundation handed over two refurbished ambulances and several other peices of equipment valued at £42,421 to the hospital in appreciation for services received and out of loyalty to the land of her birth.

It was in October 2011 that Christian, accompanied by her two daughters, returned home on vacation after living in the UK for 35 years. During their stay at a hotel in St Ann, the children got into difficulties while in the swimming pool, and after being rescued, had to be taken to the SABRH for medical attention.

"When we got to the hospital, I was shocked at the condition of the A&E Department," Christian told the gathering at the handover ceremony at the hospital on Tuesday. She commended the doctors for delivering proper treatment despite the conditions.

"The doctors worked quickly to ensure that my daughter didn't have any water in her lungs. They asserted that my daughter was not allowed to check out of the hospital, so we stayed with her. However, there weren't any chairs for either me or my younger daughter to sit on. I was so appalled at the condition of the hospital that I took my daughter out without the doctor's consent."

Since that incident, Christian has been on a mission to raise funds to improve the facilities in the A&E Department at the hospital.

"I decided to do something when I returned home to the UK," she said. "My colleagues at HMPS prison service, my church family, and Mureen Pollock supported me."

Christen fulfilled at least part of that mission when on Tuesday, she handed over the two Renault ambulances along with beds, chairs, patient lockers, hoist machines for lifting patients, wheelchairs, blood pressure machines, Zimma machines, and folding screens, among other items.

Christian suggested that persons be made to pay a small monthly fee of even $500 as a contribution to help the hospital provide care for those who cannot afford private health care.

First Secretary at the British High Commission, Steve Burns, who was in attendance, handed over two laptop computers to the hospital as a contribution from Angel Foundation UK.

Health Minister Dr Fenton Ferguson, who spoke at the handover, expressed appreciation for the donation.

"I especially welcome the donation of the ambulances, which will complement the 17 that we have procured through the National Health Fund and which are expected to be delivered later this year," Ferguson said.

He said the intention of the Government is to bring in ambulances annually until the number reaches the required quota for the health system.