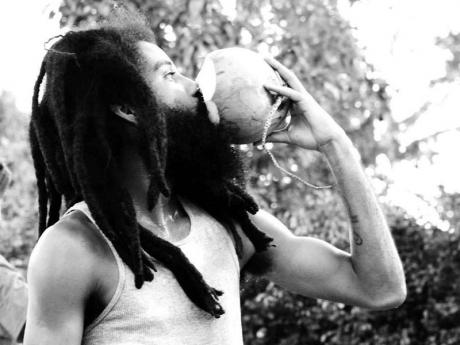 On his Tumblr page, this picture of DJ Yaadcore drinking coconut is worth a thousand words.-Contributed

Culture lovers worldwide have already picked up on the scent. Something special is happening in Jamaica as homegrown music makes its long-awaited return to roots.

As testament to this, DJ Yaadcore has released his new mix, Reggae Aroma (Volume 2) - #theRevival.

The reggae revival movement in Jamaica has achieved global visibility due to the emergence of a number of young musical acts. The names Protoje, Chronixx, Kabaka Pyramid, Jah9, Raging Fyah, Romain Virgo, Tarrus Riley, Keida, Jesse Royal, and Iba MaHr are a few that readily come to mind.

Reggae Aroma (Volume 2) - #theRevival is laced with contemporary hits by these 'Revivalists' as well as more experienced conscious acts such as Chuck Fenda, Anthony B, Sizzla Kalonji, and Damian Marley.

Yaadcore himself has been at the forefront of the movement, deep in the trenches of the airwaves, and is credited for being the first to ever play a Chronixx or Kabaka Pyramid song on radio.

"His decision to play strictly reggae music allows him to fully support the music we are doing," remarked Kabaka Pyramid. He was referring to the fact that Yaadcore used to select various genres, including dancehall and hiphop, but recently resolved to play nothing but roots tunes.

It was a principled decision that most DJs today would hesitate to consider.

"He is and will be a big strength to all of I and I in this revival movement," Kabaka added.

In full agreement, Protoje pointed out that "only a handful of DJs are truly fighting for the music, and Yaadcore is one of them. We really need more people like him on the airwaves."

As Protoje's official DJ, Yaadcore has been on tour spreading the consciousness and positivity associated with roots reggae. He is currently preparing the official mixtape for Protoje's sophomore album, The 8 Year Affair, similar to his earlier mixtape for the artiste's first album, The 7 Year Itch.