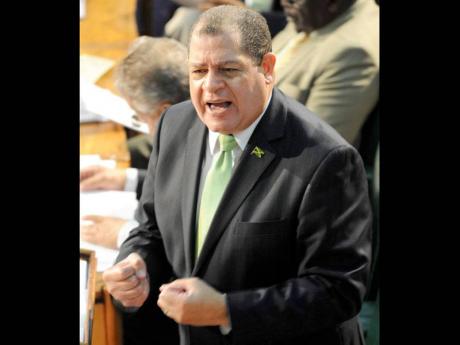 Opposition Spokesman on Finance Audley Shaw yesterday charged that Dr Peter Phillips, the finance minister, was managing what he characterised as a "bang belly" economy that would not generate growth.

It was Shaw's turn to make use of the phrase as he told the House of Representatives that the Government was relying on ill-conceived revenue windows, hostile to investment and growth.

"So you end up with a 'bang belly' hope of a balanced budget without building sustainability and long-term competitiveness," he told the House as he made his contribution to the Budget Debate.

Shaw warned the Simpson Miller administration that it was teetering on a perilous path to achieve its target of a primary surplus of 7.5 per cent and a balanced budget.

He argued that instead of seeking to create the environment for large-scale investment that generates growth and revenue, Phillips had opted to severely contract expenditure and impose high taxation which when combined create compression in the economy.

"The Government has chosen this latter route with the addition of the raid on public-sector entities as an added feature," charged Shaw. "They are counting on this raiding of the surpluses in public-sector bodies to achieve this."

Shaw contended that the Government was planning to take approximately $32 billion (gross transfers) from the public bodies "in comparison with $26 billion in 2012-2013, up from $20 billion when the JLP left government in 2011".

He said: "This is a bang belly theory of economics, where you don't use economic policy to drive economic growth by building muscle that, in turn, generates incremental returns from a well-oiled economic engine."

He suggested that in the short term, with the best luck in the world, the Government could end up balancing the books but without growth and job-creating wealth expansion.

"You are not balancing people's lives (which is the stated objective of the prime minister)," charged Shaw. "There is no nutrition in a bang belly economy to make a better life for the people."

Shaw charged that under the economic programme, Jamaicans are being deprived of housing benefits.

"We have no coherent incentive-driven tax policy that can drive growth," Shaw lamented. "But we want to suck out revenue without a corresponding mechanism to encourage investment and earnings to create new revenue streams," he added.

Shaw warned that such a move may achieve short-term gains, but woudl guarantee long-term pain. "Because we will not balance people's lives that are ravaged by joblessness, substandard housing solutions, high cost of living and marginal incomes," he warned.

Added Shaw, "The surest sign of a 'bang belly' economy is one in which there is no growth, yet we declare high primary surpluses and low deficits."