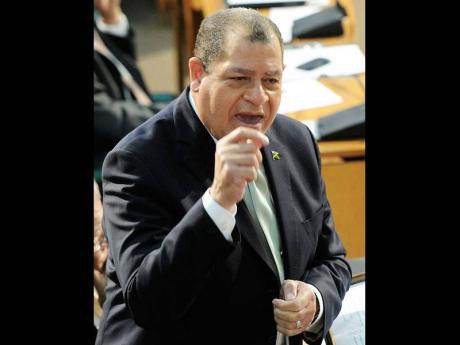 Audley Shaw, opposition spokesman on finance, during his contribution to the 2013-2014 Budget Debate, declared that the nation must use creative means "to push the envelope of economic development so that while we have PAIN, we can quickly turn the corner to experience collective GAIN ... ." With this in mind, Shaw outlined his prescription for growth. Here are some of them.

Some measures that I will now suggest are not, by any means, a complete alternative, but as a signal of some of the creative things that can combine to yield significant benefit to the economy ...

We must begin to coordinate export promotion activities in the national interest. A common method that other countries have used to encourage investment in the export sector is the system of tax holidays. We need to review our existing Export Industry Encouragement Act within the context of the new proposed Omnibus Incentives legislation. We give tax holidays now to foreign companies coming to Jamaica.

The benefits are enormous if we can have foreign exchange flowing into Jamaica from a sustained increase in our exports. AND, studies have shown that medium and small-to-medium sized enterprises (MSMEs) are more flexible in dynamically changing export markets.

Therefore, we have to promote our MSMEs as well.

Transfer FINSAC assets to the NHT

Divest remaining JRF/FINSAC assets to the NHT, as part payment for the raid, by:

Transferring the remaining residual assets held by FINSAC to the NHT.

Acquiring residual assets held by JRF in a no-cash deal, whereby JRF keeps a smaller portion of remaining assets and transfers the remainder to the NHT for ownership and management.

Since a large portion of the remaining JRF/FINSAC assets are commercial and residential real estate, this fits more neatly in the NHT's core business, for which they can then programme a business-friendly and culturally appropriate workout plan with each creditor.

The assets transferred to the NHT would offset possibly as much as $10 billion, thereby enhancing the balance sheet of the trust, while offering an opportunity for a more favourable resolution plan for existing creditors.

By placing assets of $10 billion into the NHT, this will now create a corresponding fiscal space for increased expenditure on housing solutions by the NHT.

Equally, by transferring land to the NHT to partly compensate for outstanding statutory deductions of $14.3 billion owed to the NHT by the GOJ, additional fiscal space can also be created to allow the NHT to spearhead the virtual doubling of housing solutions from 6,000 to 12,000 new units per year in partnership with the private sector, while increasing the affordability of houses.

In a recent study done by the JPS, (Jamaica Public Service Company) they have concluded that substantial savings can be achieved by using more energy-efficient technologies in Jamaica, noting that electricity consumption could be reduced by 26 per cent among residential customers, 23 per cent among the commercial sector and 12 per cent for industrial customers over a 20-year period.

In addition to the need for ramped-up energy conservation initiatives, the JPS should move aggressively to advertise its special discount rate for manufacturers, of 25 per cent reduction for use of electricity in off-peak hours.

The Government should now create a special energy support fund using PetroCaribe funds, the Government's 25 per cent profit share from the Jamaica Public Service Company Limited, and dedicate it to providing a combination of grants and low-cost, long-term loans to the tax-compliant small and medium-sized manufacturing sector for retooling for energy efficiency.

The increased production and tax revenue that will be yielded from this initiative will go back to the fiscal accounts to replenish the subsidy while stimulating job growth and foreign-exchange earnings. It is a temporary exercise that would be terminated when overall energy costs are reduced.

Mr Speaker, we need to focus on selling the country in a very strategic way and, as such, we need to have a close working relationship between the Ministry of Foreign Affairs and JAMPRO. We also need to consider the redeployment of many of our diplomatic and commercial activities to emerging markets, including Latin and Central America. We must now start seeing our foreign affairs activities as primarily marketing the country's goods and services through investment and export promotion strategies. JAMPRO should have a permanent unit in every Jamaican embassy and consulate worldwide.

You know Mr Speaker, one of the biggest hindrances to growth is crime and violence. Businesses have to close earlier than they normally want to. They have the additional burden of private security costs and extortion. The World Bank recently estimated that crime and violence cost Jamaica more than US$400 million (approximately J$40 billion) each year. And that if Jamaica could reduce its crime rate to levels such as that of Costa Rica, it could see economic growth in excess of five per cent, that is some 10 times better than the 0.5 per cent the IMF is projecting for 2013. We cannot just wait on divine intervention. We must act on many fronts simultaneously.

The adverse trade balance between Jamaica and CARICOM is a cause for great concern. While it is acknowledged that the higher cost of electricity in Jamaica is a serious impediment to competitiveness, there are issues which arise which are relevant to the moment and calls for a review of the agreement.

Among these is the question of resolving the claim that importers into Jamaica from CARICOM are oftentimes in flagrant violation of the rules of origin on which lie their ability to have duty-free access to Jamaica.

Equally, given our serious balance-of-trade deficit of US$5.0 billion, combined with our foreign-exchange shortage, an uncertain future on the PetroCaribe funds, the Government should consider suspending the CET for a specified period. This is allowable under the Treaty of Chaguaramas.

Agriculture is an important part of the growth agenda by way of import substitution and export of fresh and processed goods. A good example of this is the Irish potato industry.

The minister of agriculture has spent a lot of time talking about Irish potato production, giving the impression that the former government damaged production levels by bringing in bad seed potatoes.

These are facts. Let us do what is necessary to keep this vital industry growing.

On the issue of agro parks, we fully support this concept. We believe in a value-added approach to agriculture, where farmers' output can become agro processors' input with branded products such as sauces and spices. This is key to sustainable export agriculture.

We support the farmers and agro-processors of Jamaica. In fact, let's be clear, these agro parks that the minister and finance minister speaks of as a growth strategy were conceptualised and developed by the JLP government.

... Agro-Invest, the agency of the Ministry of Agriculture to implement this programme, now seems to be having problems. In the last three weeks ,five persons have been dismissed from Agro-Invest, and our understanding is that the implementation of these agro parks is now in virtual disarray. Let us get it right and not miss this opportunity to grow export-agriculture.