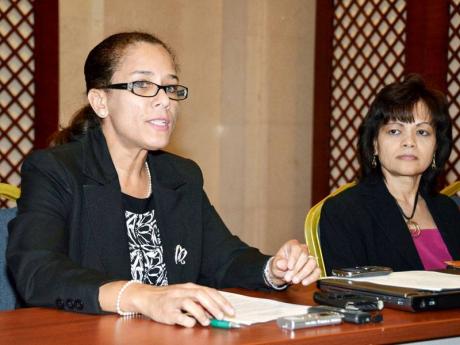 Evelyn Smith (left), Jamaica Hotel and Tourist Association (JHTA) president, addressing the media at the press conference on Monday afternoon, announcing the Jamaica Product Exchange to be held at the Montego Bay Convention Centre this weekend. Sitting next to her is executive director of the JHTA, Camille Needham. - Photo by Janet Silvera

A large contingent of European tour operators is expected to arrive in the island this weekend for the island's premier marketing event, the Jamaica Product Exchange (JAPEX).

The operators, some representing the emerging markets of Slovakia, Czech Republic, Russia, Poland and Hungary, complete a slate that includes Ireland, Spain and the United Kingdom.

In addition, the island's tourism stakeholders expect to welcome a number of traditional operators out of important source markets - the United States and Canada.

Addressing Jamaica Hotel and Tourist Association (JHTA) and Jamaica Tourist Board (JTB) executives, as well as members of the media, on Monday afternoon at the Montego Bay Convention Centre, president of the JHTA, Evelyn Smith, announced that a total of 94 buyer delegates had registered for the event. In addition, some 30 international travel writers and the media will provide coverage.

"We anticipate great success once again from this event which will facilitate at least 214 supplier delegates from all of our six resort areas," stated Smith, pointing out that the Jamaica-based suppliers would be given the opportunity to negotiate contracts and generally maintain and increase tourism traffic into the island.

She noted that the "JHTA and JTB have done a lot of work since 2012 to attract the Europeans to Jamaica", adding, "we are already reaping the benefits of that work with charters from Russia and the Czech Republic".

Optimistic about the prospects to be gained from hosting the event, Smith said once again the JHTA had invited other industries such as agriculture, manufacturing, and the arts and crafts to exhibit at JAPEX.

"This reflects our continued commitment to nurturing even greater linkages between our sector and as many other sectors within our country," she stated.

Prime Minister Portia Simpson Miller is billed to bring the keynote address at the opening ceremony on Sunday, April 28, at the Montego Bay Convention Centre.

The prime minister, who in the past has served as minister of tourism, will likely understand more than anyone else that, with Jamaica's current economic and financial challenges, the sector is now more important than ever before.

All, Smith said, are optimistic that the show will be "the catalyst for robust business for the tourist industry".