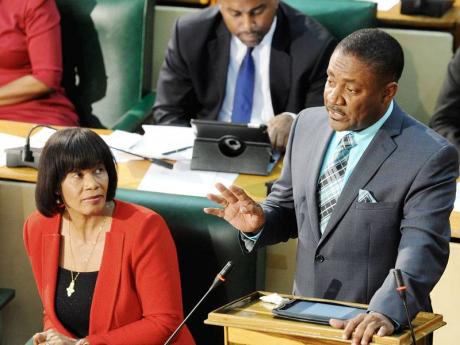 There appears to be a flicker of light emerging at the end of the proverbial tunnel that had for long been darkened by protracted uncertainty over the future of the energy sector.

Minister of Science, Technology, Energy and Mining Phillip Paulwell disclosed yesterday that the Government is now focusing on four companies to advance its 360-megawatt project to generate cheaper electricity rates.

Making his contribution to the Budget Debate in the House of Representatives, Paulwell identified three of the companies as Amorview/Tank-Weld, the Jamaica Public Service Company (JPS) and Azurest/Cambridge.

He said a fourth emerged in the form of an unsolicited proposal from a Hong Kong-based company that owns liquefied natural gas (LNG) resources, after the Government had all but given up on such a source of energy.

Paulwell gave an undertaking that the Government is likely to receive further recommendations after effecting negotiations with the four companies.

"After several stops and starts, I can speak with certainty that a positive change is about to come to the supply of electricity in Jamaica," Paulwell told the House of Representatives as he made his presentation during the 2013-2014 Budget Debate.

The delays, he conceded, were caused by the collapse of the LNG project.

The JPS, he said, submitted proposals for 323-megawatt and a 350-megawatt combined-cycle plant, both proposed for Old Harbour.

And Azurest/Cambridge, the minister divulged, presented a proposal for a 388-megawatt plant mounted on a barge. The minister told the House that all three propose the use of natural gas.

Paulwell expressed urgency in kick-starting the project in the current financial year. "There have been too many delays and we can no longer live with these high electricity costs."

Against this backdrop, he said the Office of Utilities Regulation (OUR) engaged the services of consultants Mott MacDonald in evaluating the proposals and considered a number of factors including:

The firmness of the proposal;

The overall price and expected impact on retail electricity rates;

The overall feasibility of the project.

Paulwell said the evaluation report revealed that of 14 project proposals submitted, 10 were screened for detailed technical and comparative economic analysis. This was later slashed to three by the OUR.

However, Paulwell reminded the House that the Government has since received a proposal from a Hong Kong-based company to construct a LNG-receiving terminal power plant to supply LNG from its own gas fields.

He said Cabinet decided to embrace the firm in the negotiation programme based on its intention to build a combine-cycle gas-fired 360-megawatt power plant adjacent to the LNG hub terminal.

Accordingly, Paulwell said the Government is moving to enact legislation to accord powers to the OUR, similar to that it possesses over the telecommunications sector.