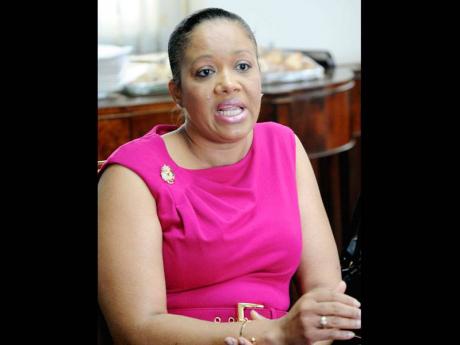 President of the Customs Brokers and Freight Forwarders Association of Jamaica, Jacqueline Cole.

Malfunctioning of the electronic clearance system at the Jamaica Customs Department is costing importers additional time and money to have their goods released at the ports because they are unable to complete and submit correct entry forms.

Customs brokers complain that they, as well as their clients, are faced with paying additional fees to process transactions and extra storage fees.

This arose from the introduction of a new customs administration fee (CAF) implemented on April 1, and before that the broadening of the general consumption tax (GCT) base to include all fees and taxes paid at the ports and which became effective March 1.

Both of those measures were announced by Finance and Planning Minister Dr Peter Phillips in February as part of a J$15.9-billion tax package.

President of the Customs Brokers and Freight Forwarders Association of Jamaica (CBFFAJ), Jacqueline Cole, suggested that the problems could have been avoided if proper pilot tests were done by Fiscal Services Limited - the organisation that developed the software - prior to the implementation of the tax measures.

Cole said Fiscal Services has done some trials at the Ministry of Finance at Heroes Circle in Kingston where it is based, "but we have indicated to them that that test environment is not compatible to the real world because it works up there, but when it comes out here, it doesn't".

As a solution, Cole said members of the CBFFAJ have indicated a willingness to participate in testing any software before it is implemented.

"That would help with the problems we are having now," she told Wednesday Business last week.

Fiscal Services redirected Wednesday Business queries to the Customs Department, which said last week it was preparing a press release on the matter, but which has not been received up to press time.

Fiscal Services designs and manages the software that facilitates electronic online processing of import and export entries, a system that brokers currently use to clear their goods at Customs. However, major changes to the system were required to facilitate the implementation of the new tax measures.

"Basically, the system allows us to do everything electronically," Cole said. "We input the entries in the system and submit it online. The system calculates the taxes that are to be paid as well," she added.

"Each time the Government changes the tax measures that affects the importation of goods these things happen, because Fiscal Services Limited has to now rush to get the information from Customs and then go back and upgrade the software so we can do the entries to clear the goods," Cole said.

She said most of the problems encountered in relation to the widening of the GCT base are now fixed but that was done after 15 different upgrades to the software.

However, with the April 1 implementation of the CAF, a series of new problems has arisen, and even after nine versions of the software were released, they were still having problems.

"I don't think the worse, is behind us. I think the problem will continue to the end of the month and into next month," said Cole, adding, "I don't see them solving it just yet."

She said a common problem faced by brokers has to do with the system interpreting the entries.

"The system can't interpret the entries properly, so it miscalculates the fees that are to be collected," she said.

In the meantime, the Customs Department has put certain provisions in place to facilitate the brokers, but there are still complaints because they bring with them additional fees.

Cole explained that in the interim, brokers are allowed to send a letter to Customs detailing the value of the goods and the taxes to be paid, among other things, and have the goods released. This system has always been in place, but now attracts a fee of $10,000, following its increase from $1,200 as part of the revenue measures announced in February.

Cole explained that when the system is fixed, they will be required to pay an additional fee of $5,000 to process the correct entries electronically.

The CBFFAJ president said some clients have agreed to pay whatever fees are shown on the entries generated by the faulty computer system even though the calculations may be wrong.

However, when they do this, if the fee is more than they are required to pay, they can apply for a refund when the system starts to work properly. However, again, this attracts a fee of $5,000 and is classified as an amendment to the declaration.

If the system calculates taxes of a lesser value, importers may pay the amount on the entry and use a general receipt, which is done manually, to pay the difference.

"Nobody wants to use the general receipt because the process of forming a line and waiting for hours are things of the past, and if you see the length of the lines, nobody would want to wait in one of those," Cole said.