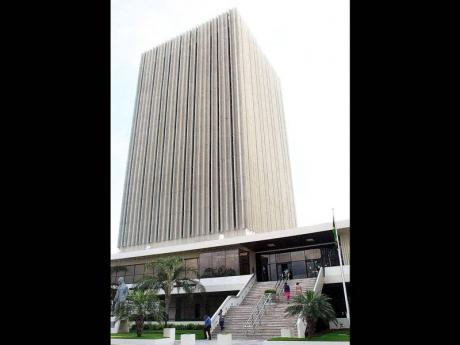 The Bank of Jamaica. - File

The National Debt Exchange (NDX) will shave some $23 billion from the investment profile of the Bank of Jamaica (BOJ), cutting into its cash flow, but according to an economist, it should not affect the institution's ability to mop up liquidity.

The BOJ voluntarily participated in the NDX in February, exchanging domestic debt instruments for new ones with lower interest rates and longer maturities, including the introduction of new Fixed Rate Accreting Notes (FRANs), designed primarily for state-owned entities, the bank stated in its annual report.

"The bank's acceptance of the (NDX) offer will impact on the amount and timing of future cash flows from investment in Government of Jamaica (GOJ) securities," said notes in the report.

The Bank held $92.1 billion worth of GOJ securities subject to the offer at December 2012. It received new notes issued with J$80 of initial principal value for every J$100 of principal value of old notes held. The new notes will mature in 2028.

"There is expected to be a difference between the carrying value of the old notes and the fair value of the new notes (FRANs) at acquisition, which is estimated at $23 billion," stated BOJ on the implication of its acceptance of the NDX.

It added that the impact would include a lowering of the average coupon rate of 9.4 per cent on its notes. The new notes will initially earn interest at an effective rate of 8.0 per cent per annum. All new notes will mature in 2028 but may be redeemed by the Government at any time after August 15, 2020.

"The profile of liquidity, credit and market risks of the bank's domestic investment portfolio ... will change with the bank's participation in the National Debt Exchange," said the report for the year ended December 31, 2012.

The BOJ indicated that the fair value of the instruments will be returned over time from 80 per cent to 100 per cent by 2017.

The BOJ did not respond to queries by Wednesday Business for additional information up to press time.

However, an economist, who opted to remain anonymous because of his brokerage house's reluctance to comment on BOJ activities, indicated that the $23 billion would have little impact on monetary-policy objectives.

"It is neither here nor there for the average man in the street given that the economy will be much active this year," said the economist. He added that the injection of resources from the International Monetary Fund (IMF) would reduce government local borrowing, which would obviate the need for heavy BOJ activity to manage inflation and the local currency.

"There will be no major impact. That's because the GOJ will borrow less than J$13.8 billion from the local market this fiscal year so there will be no liquidity available for the central bank to mop up," the economist said.

The more than J$860-billion NDX, an IMF conditionality, is projected to save Jamaica J$17 billion in annual debt-servicing costs over seven years.

The NDX, which took place in mid-February this year, is Jamaica's second such programme, the Jamaica Debt Exchange having taken place in 2010.