Thieves jet off with $20m worth of airplane fuel 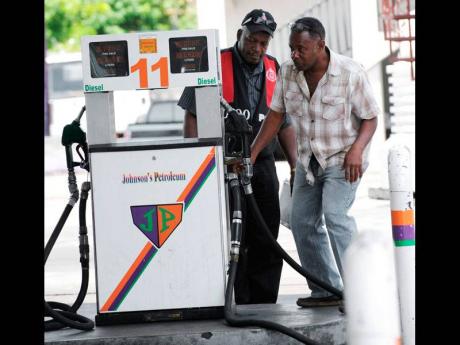 Lynford Johnson (right), owner of Johnson's Petroleum on Beechwood Avenue in Kingston, accompanies a policeman during the inspection of a gas pump while an operation was under way at the facility yesterday. After the police left, Johnson indicated that they had been making checks related to an investigation into fuel recently stolen from a marketing company. - Ricardo Makyn/Staff Photographer

Highly placed police sources have confirmed that more than 200,000 litres of jet fuel has been stolen from the Sangster International Airport in Montego Bay, St James.

The fuel, valued at $20 million, is owned by a consortium, including Jamaica Aircraft Refuelling Services (partnership between PetroJam and British Petroleum), Esso and Total.

The incident occurred between 9 o'clock Monday night and 4 o'clock on Tuesday morning.

Jet fuel is a high grade of kerosene which can be used in diesel engines. There are several vehicles in Jamaica that carry diesel engines, particularly buses, trucks and tractors.

A fuel contractor at the airport confirmed the incident, but would not go any further, stating that it was a delicate and dangerous issue.

The Gleaner understands that this is the second incident in months. No arrests were made the last time thieves made off with a big haul.