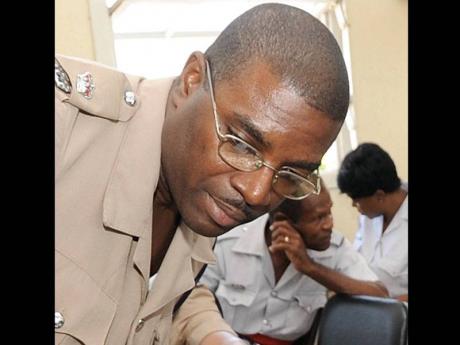 CLARENDON CONTINUES to be a major crime hotspot, with serious crimes moving upwards in the first four months of the year.

Already, 38 persons have been murdered in Clarendon, 11 more than the 27 killed during the corresponding period in 2012, which represents a 40 per cent jump in murders, according to figures released by the Clarendon police at a press briefing in May Pen on Monday.

The police have set a target of 48 murders or fewer this year.

The division also reported a 20 per cent spike in shootings. However, there was a slight decline in break-ins, rapes and fatal motor vehicle crashes.

Senior Superintendent Michael Bailey, head of the Clarendon Police Division, said the uptick in the crime figure was expected and can be directly attributed to the downturn in employment activities because of the completion of a number of mega construction projects in the parish.

"We expected that there would have been an upsurge in crime in Clarendon, especially in the first quarter of the year, with the completion of some big construction projects in the parish. These projects would have provided some form of employment for some of these people," said Bailey.

"Therefore, with the completion of Highway 2000, the bauxite mud-lake and some other big construction projects, criminals are going to find opportunities to make money, legally or otherwise," he told the press conference.

Bailey reaffirmed the police's commitment to stamp out crime in the parish, but said the lawmen would be unable to achieve the stated objectives without the support of the citizens.