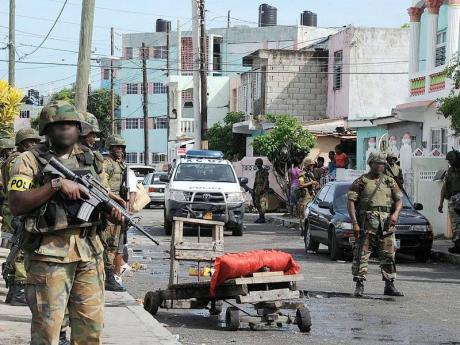 Security forces patrol Tivoli Gardens in May 2010 after an operation to serve an extradition warrant on Christopher 'Dudus' Coke. - FILE

AN INTERIM report into what Public Defender Earl Witter describes as a "siege" of Tivoli Gardens during a state of emergency in May 2010 has called for a thorough commission of enquiry into activities of the security forces and gunmen.

The report, tabled in Parliament yesterday after missing several deadlines, highlighted that provisional claims for 688 persons who have submitted 1,295 documented complaints are quantified at a little more than $110.8 million.

Witter also wants both Police Commissioner Owen Ellington and then chief of defence staff, now retired, Rear Admiral Hardley Lewin, as well as other senior personnel, to testify about their oversight operations before a judicial enquiry.

The public defender is also recommending that former prime minister and chairman of the defence board, Bruce Golding, and his then National Security Minister Dwight Nelson to testify at the constituted commission of enquiry.

In relation to the proposed claims, Witter said they would not take into account personal injury and detention.

"This sum does not take account of claims which may yet be made for monetary compensation regarding the alleged extrajudicial killings. A caring, volunteer cadre of attorneys-at-law in private practice will presently begin the assessment," the report stated.

According to the report, in the assessment process, all claims will be disaggregated in order to take account of payouts made by the Government to complainants and other persons, amounting to $92.1 million, according to official figures. This sum was reportedly distributed by the Ministry of Labour and Social Security, at the instance of the Social Development Commission, as part of a programme of urgent "social intervention" instituted within weeks of the incursion.

The report drew on several hundred handwritten statements of complainants and witnesses, who gave accounts of what happened to them, their relatives, friends and neighbours, at the hands of the security forces. It also reviewed statements furnished by state security personnel to the Bureau of Special Investigations and from what Witter called "authoritative sources".

"This interim report should, therefore, dispel any doubt of the need for an independent public enquiry into matters of the gravest concern as well as immense public importance," Witter declared in his 257-page report.

Witter's interim report is also intimating that the official death toll could be increased to 81 instead of the 76 previously reported.

Of the 76 persons (including three members of the security forces) killed during the so-called incursion, Witter said he was investigating complaints that 44 were instances of extrajudicial killings.

"In addition, investigations have turned up five cases of missing persons, four of them extant, the corpse of one of them now having been positively identified by DNA analysis. Those four may yet be presumed dead, according to law. Four male corpses remaining unidentified may be theirs. If not, the known civilian body count attributable to relevant activities would rise to 80 and the overall death toll to 81," the report outlined.

The public defender painted a graphic picture of what he saw of the alleged victims of the incursion when he visited Madden's Funeral Home on North Street in Kingston.

"At our insistence, we were admitted to the morgue and viewed three large mounds of tagged corpses, most in varying stages of decomposition, many nude or scantily clad, piled up on the bare concrete floor: a macabre, surreal spectre of mass slaughter. At first, the two insensate and impatient morgue attendants on duty could give no accurate tally of these dead," Witter recounted.

Turning to former Tivoli Gardens strongman Christopher 'Dudus' Coke, who gained renown as a benefactor of the poor, Witter said Coke was both feared and revered as the undisputed don.

"Adults and children alike came to depend upon his largesse. According to his supporters and admirers, it was he who kept a territory relatively crime-free, almost displacing the Jamaica Constabulary Force, whose members were scorned or deeply distrusted by the citizenry; that it was he who kept children in school and off the streets at night, enforcing his own peculiar brand of discipline."

The categories of complaints are:

i. Allegations of extrajudicial killings