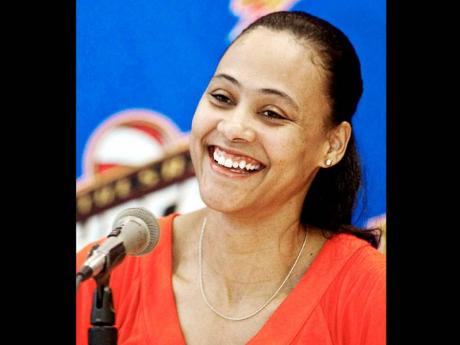 Held under the theme 'Changing the Game', the third staging of the Business of Sport International Conference, held at The Jamaica Pegasus hotel in New Kingston, brought out some of the country's top corporate, sporting and media officials with an impressive list of local and international presenters.

Former American sprinter Marion Jones is expected to make her contribution later today in perhaps the most anticipated presentation of the two-day conference. She will be speaking on the topic 'Paradise Gained - Lost and Redeemed'.

Access Athlete's Matthew Allinson, international investor Horace Madison and chairman of the Victoria Mutual Building Society, Michael McMorris, were among the high-profile group of presenters that engaged the well-attended conference.

Wyche spoke to the NFL's global expansion efforts, imploring countries like Jamaica, which have exported talent to the league, to make every effort to benefit from the popularity of the league.

The now-seasoned broadcaster went on to underline the value of media rights and the impact of television as a driving force for the development of sport and all stakeholders.

Allinson, who like Wyche and Jureidini spoke on the topic 'The Synergy of the Trilogy - the athlete, the coach and the manager', implored athletes to surround themselves with a solid team of minders and to become the architect of their own brand.

Jureidini, who also serves on the executive of the Premier League Clubs Association, shared the practical experiences of the recently crowned Premier League champions, Harbour View, and called for a rethinking of the developmental process of young local talent.

Stewart and Powell, who also serves as a cricket analyst on ESPN, presented on the topic 'Managing the media in brand development', with Madison and McMorris contributing on 'Put your money where your mouth is - Invest in Athletes!'.

Seegobin, who represents 100m world champion Yohan Blake and Olympic bronze medallist Warren Weir, among others, was joined by lawyer Mike Townley in presenting on the topic 'Image Rights, Rule 40 and the value of the Investment'.

Today's opening session is set to start at 9 a.m. at the same location.