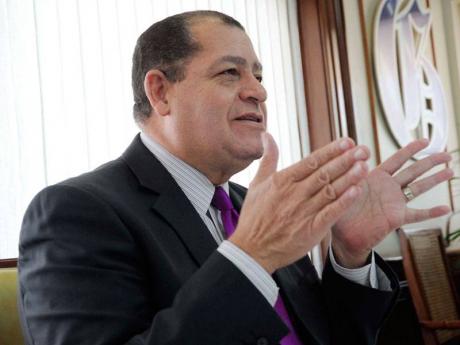 SHAW: Don't bother put all your eggs in the basket of all these mega projects and say that is going to save us.

Acknowledging this week's announcement by Prime Minister Portia Simpson Miller of the prospect of 10,000 jobs being created with the establishment of a China Harbour Engineering Company (CHEC)-driven industrial park, Opposition Spokesman on Finance Audley Shaw is warning the administration against developing an over-reliance on mega projects.

"Don't bother put all your eggs in the basket of all these mega projects and say that is going to save us," Shaw said during a meeting with senior journalists at The Gleaner's North Street offices in Kingston yesterday.

"Mega projects sometimes are loss leaders that help to pave the way, but you cannot ignore your many thousands of small businesses out there that need nurturing and encouragement," he said.

Shaw, who was accompanied by colleague Opposition spokesmen Gregory Mair and Delroy Chuck, yesterday argued that the Government, in relying heavily on mega projects and increasing the tax burden on small businesses, was making a big mistake.

He said the country could fail to meet growth targets set out in the four-year extended fund facility, which was approved by the Board of the International Monetary Fund (IMF) on Wednesday.

"I believe the minister of finance has made a very serious error to allow the multilaterals and his technocrats to sit down and systematically target the productive sector and put on a whole raft of additional taxes on them. And things that were given to them to stimulate the economy, they have taken those away from them," Shaw said.

He continued: "It is a major error that he has made, and we are going to feel the consequences down the line. We might not even make those modest growth targets that have been projected under the medium-term programme."

The former finance minister's presentation was centred around the most recent tax measures implemented by the Government.

He said the increase in stamp duty, transfer tax, an assets tax, and dividend taxes would severely affect new investments and expansion in the productive sector.

Shaw's comments come on the heels of Simpson Miller's use of her Budget Debate presentation in the House of Representatives on Tuesday to indicate mega projects - which would allow the country to unleash the fullness of its potential - were at the centre of the administration's growth agenda.

Currently being pursued by the Government is the establishment of a logistics hub, which, Simpson Miller said, was a central plank of the overall growth strategy and which represented a potential $9 billion in foreign direct investment.

In seeking to drive the logistics hub, the Port Authority signed a memorandum of understanding with CHEC to explore the feasibility of establishing a new trans-shipment port at Fort Augusta.

CHEC recently said it was no longer interested in the Fort Augusta location, indicating that the facility was not big enough to provide the space the company required.

While the final location for the project is yet to be determined, Simpson Miller said preliminary estimates of the mega investment by CHEC were between US$1.2 billion and US$1.5 billion.

"It will consist of trans-shipment facilities, a logistics centre, industrial plants, a cement plant, and possibly, a power plant," the prime minister said.

Yesterday, Shaw said the change in concept for the logistics hub was "not a bad idea because it is bigger thinking to go to another location that has more space and can really get ready for these mega liners coming out of Panama".

He said, however, that it would be foolhardy of anyone to think that the fruits of the logistics hub could come overnight.