Gay is in the picture 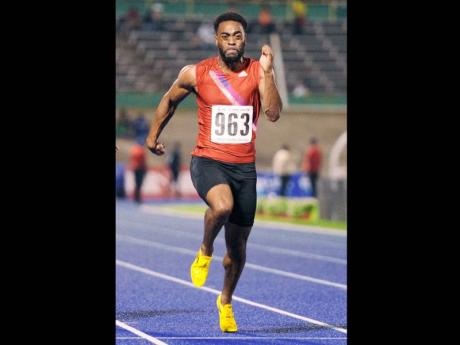 Behind the warm and respectful applause for Tyson Gay at last Saturday's Jamaica Invitational, there was tangible concern. The quiet American sprinter placed himself squarely in the World Championships sprint picture with a 9.86-second dash over 100 metres.

When it was over, he was surrounded by fans with gadgets of various configurations for a photo session befitting a superstar.

If you are still worried about the injuries that have slowed Bolt, Powell and Yohan Blake in 2013, here's another tidbit to ponder. Powell's 9.84 stroll was the start of a world-record chase that crested at 9.77 seconds in June. The tall man's monumental run of 9.76 was followed by world records in New York - 9.72 in a race where Gay was second and in the Olympic final at 9.69.

Bolt has moved the world record to 9.58 seconds since then, so there's no assurance that Gay - or anyone - will get close anytime soon. It is clear, however, that the American is on his way to a fine season. That puts him on collision course with Jamaica.

Starting with Powell's 2005 world record, Jamaica has taken over the men's sprints. This dominance was at its peak last year at the London Olympics. Led by a brilliant Bolt double, Jamaica won five of the six medals available in the 100m and 200m. A chance for a complete double medal sweep went down when Powell's recurring groin injury stopped him in the Olympic 100 final.

To polish things off, Jamaica won the 4x100 in world-record time.

Gay was fourth in the 100m in 9.80 seconds. That was remarkable for a sprinter whose training had been impaired by injury and surgery for four years. Even though he was second to Bolt in the 9.58 race at the 2009 World Championships, problems had already begun. He pulled up at the 2008 US Olympic Trials and struggled to the Olympic 100m semi-final later that year in Beijing.

Even so, he ran 9.71 in his pursuit of Bolt at the 2009 Worlds and ran 9.69 later that season under pluperfect conditions. Those results prompted retired World and Olympic champion Maurice Greene to call him "the best injured sprinter ever" in a recent Gleaner interview with my colleague, André Lowe.

By the time you read this, the tall man would have made his season's debut in the 100m and you can expect Blake, who is the reigning world 100m champion, and Powell, to roll out when they are ready. Comparisons will be made, but there's a long way to go before the World Championships in August.

If recent seasons are any guide, Jamaica's Big Three probably won't meet Gay and Olympic bronze-medal winner Justin Gatlin too often before then. In fact, it's probably true that Gay wouldn't have met any of the Big Three, had they been fit, in Kingston.

There seems to be a tacit understanding among meet promoters and agents that early-season events are an extension of training for the world's best sprinters. Big three, four and five-way clashes are reserved for championships - the most important part of the sport - and the biggest European invitational meets.

The clashes will come. In the meantime, it seems we can all look forward to great races, especially in Moscow at the World Championships. Gay and Gatlin will be hoping to take the USA back to the top of world sprinting. On the other hand, the Jamaicans will be hoping the sprint picture remains the same as it was in London.