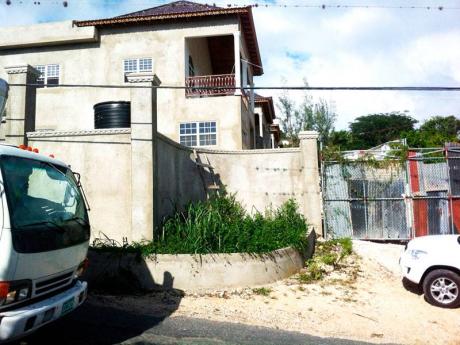 The unfinished town houses belonging to a Montego Bay family, whose homes and business place were raided by the police yesterday. 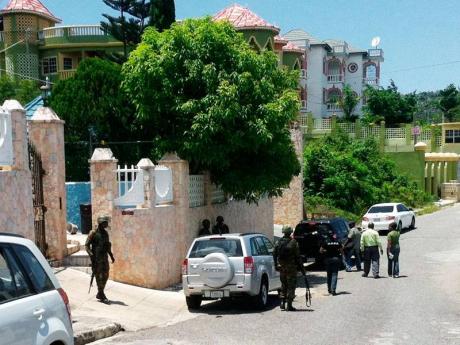 Members of the raiding party outside one of the houses that were searched in Montego Bay yesterday. - Photo by Adrian Frater
1
2

An unspecified amount of drugs and an undetermined sum of money were seized and one person taken into custody during a major police operation in the upscale Westgate Hill community in Montego Bay, St James, yesterday.

"This operation has been quite successful … . We have seized a substantial amount of drugs and an undetermined sum of money," a police officer told The Gleaner. "One person has been taken into custody so far."

The operation, which started approximately 5:30 a.m. and involved personnel from the Financial Investigations Division of the Ministry of Finance and the Major Organised Crime and Anti-Corruption Task Force (MOCA), including its United States operatives and the Jamaica Defence Force, targeted three houses owned by members of the same family.

"I woke up at about 5:30 and was getting ready for my morning devotion when I heard a loud banging on my door," a female family member told The Gleaner. "When I went to investigate, I discovered that police and soldiers were all over my yard."

During the search of the houses, drugs, money and several bags containing documents and other items were taken away by the police.

A Canadian national, a tenant at one of the houses, was taken into custody. According to a police source, he is likely to be charged for the drugs, which were reportedly found in the section of the house which he occupied.

But the female family member, distancing herself from the haul, said: "We want to make it absolutely clear that whatever (drugs) they found was found in an area occupied by a tenant."

She added: "What was found has nothing to do with my family."

Following the search of the houses, the police turned their attention to the family's business, which is located in proximity to the Mount Salem Police Station. At that location, several documents and computers were taken.

"They (the police) have questioned several family members and we have cooperated fully," the female householder told The Gleaner. "They have taken some documents, so let us see what will happen."

The police made a final stop shortly after 4 p.m. at a property where the family is constructing several town houses in the nearby Vernon's Drive area. While nothing was taken from that location, the US members of the MOCA team were observed taking photographs of the buildings.

Dahlia Garrick, MOCA's media liaison officer, who was on location during the raids, said she would have provided an update at the end of operations, but left without keeping her promise.