Pocket Rocket Foundation off and running 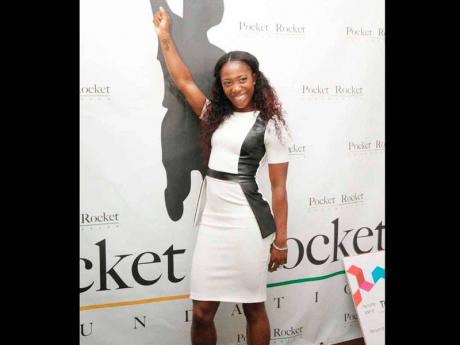 Two-time 100m Olympic champion Shelly-Ann Fraser-Pryce, is seeking to give other Jamaican youngsters the chance to follow in her footsteps and achieve success at the highest level, following the launch of her foundation yesterday at the Terra Nova All Suite Hotel in Kingston.

The Shelly-Ann Fraser-Pryce Pocket Rocket Foundation, which was founded and chaired by the athletics superstar, is set to focus on the development of promising young athletes in secondary schools by providing them with scholarships to cover their academic costs.

"Our work at the foundation is about making sure our future athletes have the same and even better opportunities than I had," Fraser-Pryce said.

The former Wolmer's Girls' student was aided during her rise to global stardom and as a result has a strong desire to create lasting change in the lives of student athletes and children across Jamaica.

"I got the support I needed and it made the difference," Fraser-Pryce shared. "I wouldn't be who and where I am today without it, and the scholarships we offer here are investments in the development of sports in Jamaica."

OPEN TO ALL SPORTS

Bruce James, president of MVP Track and Field Club, who also serves as the Pocket Rocket Foundation's president, disclosed that the scholarships being offered by the foundation are open to students engaged in all forms of sport.

"The foundation is pleased to offer scholarships to secondary-school athletes that are eligible and meet the published criteria for the scholarships," James remarked.

"We are not focused on the particular sport you play; we are focused on the athlete as an individual. So all students, regardless of their sporting pursuit, can apply to the foundation for an academic scholarship."

Students wishing to obtain scholarships from the foundation must maintain regular attendance and play an active role in school, maintain a minimum of 60 per cent average in five subjects, represent the school in at least one sport and display acceptable behaviour.

It was also announced that the foundation will partner the Inter-Secondary School Sports Association to host two public-relations seminars annually for student athletes representing their schools locally and internationally.

In addition to the chairperson and president, the foundation has five other board members, namely Donovan Walker, Jeffery Gordon, Colleen Montague, Raphael Walker and Paula Pinnock-MacLeod.