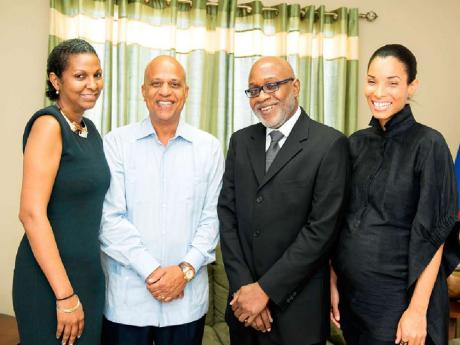 Kim Simplis-Barrow, wife of the Prime Minister of Belize Dean Barrow and the country's special envoy for women and children, will be leading a delegation to this year's Caribbean Fashionweek (CFW). The Belizean delegation will include officials, designers and models. Belize is interested in developing its creative industries, including fashion.

This year, CFW takes place in Kingston from June 6-10.

While in Jamaica, Barrow and her team will visit CFW events and participate in activities such as the business forum and designer workshops. She will also meet with local officials, especially those responsible for creative industry development.

The initiative comes on the heels of an official visit to Belize by Kingsley Cooper, executive chairman of Pulse Investments Ltd and chairman of Jamaica's Entertainment Advisory Board. Cooper was accompanied by Romae Gordon, Pulse's general manager and fashion director. They went on the invitation of Prime Minister Dean Barrow and Mrs Kim Simplis-Barrow, their visit organised by Belize's Foreign Ministry.

Caribbean Fashionweek will feature five days and nights of top designers from around the Caribbean and outside the region. There will be supermodels, superstar performances, after parties, workshops, and an Exhibition Hall for designers.

A new Caribbean Fashionweek feature in its 13-year history, a made-for-television live event titled Ready for CFW will feature emerging designers in the lead-up to the main shows. Some will be rewarded with prizes, including the opportunity to show at CFW 2013.