From her mother's veranda to her salon 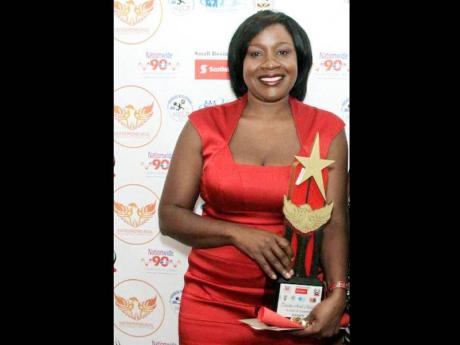 Treacha Reid-McCalla of Shades of Elegance with her award for Scotibank's entrepreneurial challenge, demonstrating that having a clear vision is a must when operating a business. - Contributed 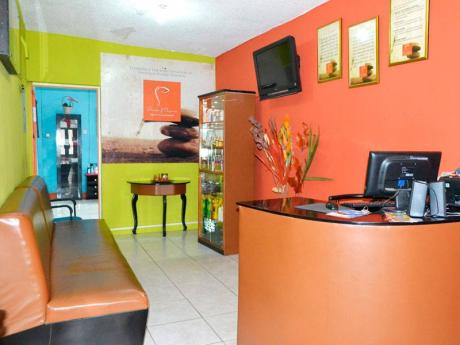 After leaving high school, Treacha Reid-McCalla's ambition was to pursue a career in singing. However, her mother of four had other plans for her and instead insisted that she go to beauty school to learn hairdressing.

"My mother insisted that all her children get a skill because even with your subjects and getting a nice job, you can be laid off at any time. I was upset because there was this stigma that persons who did skilled jobs were not bright academically, so I started without any form of enthusiasm."

But after a week in the programme, she realised the true potential of the cosmetology field.

"After a week, I fell in love with it as I realised that there is a science to cosmetology. There is also the professionalism aspect of it and the business side which have turned persons into multimillionaires."

After graduating, Reid-McCalla was now in the starting blocks. And at the age of 20, right on her mother's veranda, Shades of Elegance was born.

With no capital, the young entrepreneur had to credit supplies for her business.

"To start out, I had no money, so had to credit $32,000 worth of products. I got a chair, relaxer and treatment systems, blow dryer, manicure table, pedicure bath, combs and brushes," she recalled. Reid-McCalla was adamant that she would not allow her shortcomings to defeat her. Instead, she wanted to rise above her financial constraints.

"People use poverty as an excuse. I grew up poor, but I decided that it would not impede me. I was not going to blame my mother or Government. I just needed to act and make something of myself."

In a few months, she was able to pay off her debt. Now, she was yearning to grow her business and get the recognition she thought she deserved. For this to happen, though, she realised that she had to relocate.

"I got a very small space in Old Harbour, where I was paying $1,000 a month. I was doing hairdressing and while the space was like a box, I realised that I was getting more clients which led to the growth in my client base."

With her keen sense of business and the eye to spot new possibilities, McCalla decided to say farewell to that space after eight months, to move to a larger location. This place happens to be her primary business location, which has been transformed into a salon and spa.

With a bit of risk involved, this was the ideal stepping stone to propel Reid-McCalla on her successful business journey.

"I took a risk because I was moving from a location where I was paying $1,000 to one which required $15,000. I was also concerned about getting enough clients to cover my expenses and wondered if my current clients would follow me. But I always saw myself in the bigger picture, so I had to put myself where I wanted to be."

Finding a bigger space was not the only aim of the entrepreneur. To maintain an edge and to give value to her clients, going back to beauty school to upgrade her skills was the only option.

"I went back to school and did skincare and beauty therapy courses. I am also a trained and certified trichologist and aesthetician," she told Flair proudly.

These qualifications allowed her to expand her list of services and her current space.

"I had to increase in size so as to accommodate all that I wanted to do. Customers should enjoy the services but in a spacious and comfortable atmosphere. So we had to expand by taking over more shop spaces to turn into one."

Today, she employs 10 members of staff. Very contented with where she is so far, Reid-McCalla believes she is well on her way to claiming a huge share of the local beauty industry, and in the near future.

A leader in her own right, Reid-McCalla strongly believes that achieving business growth is also dependent on her staff.

"Team work makes the dream work, so my staff has to share in my belief and work as if it is theirs. This is why every Wednesday morning we have team-building sessions where I try to have mentors come in. We also deal with customer service and self-development. I believe strongly that building a better company means building better people."

Residing in Old Harbour since she was 10 years old, the business-minded mother and wife, said that investing in her hometown is a strategic move.

"More people are moving to Old Harbour and so there are a lot more professionals, families and even housewives whom we cater to. We give them a reason to stay in Old Harbour and get pampered and taken care of without having to go elsewhere."

Shades of Elegance is also one of a kind in the area and is viewed as a trendsetter.

"We were the first to introduce certain services to Old Harbour. Waxing, facials and massages were all new here."

While her success story reveals a tremendous journey, Reid-McCalla highlighted that it is not without challenges or risks.

According to her, the difficulties encountered generally surround the day-to-day operations, which involves high overheads and to remain current with legalities and taxation.

It also involves risks - taking on loans to invest in her business, is one of the major decisions she has had to make over the years. This was especially daunting during the years of recession.

"During the recession was when we decided to expand in terms of space and furniture. Everyone thought I was crazy because it was really slow during that time, but I thought borrowing $1,000,000 was what I needed to do to please and win over new customers."

This turned out to be a very smart move and she was able to repay the loan quicker than she had anticipated. This led to her winning the Scotiabank's Nationwide entrepreneurship challenge, which required companies to demonstrate how they successfully and creatively survived the recession.

Reid-McCalla has been able to open another location in the area to include barbering services for men.

Having also won the Scotiabank's Business Woman of the Year Award for 2012, Reid-McCalla encourages persons to chase their dreams.

"Once you have the idea, go for it, as action is what takes you closer to your dream. Take advice from those who have succeeded and can demonstrate this through their own success. And having mentors is also very important throughout your business journey."

She also stressed the importance of perseverance.

"You can fall, but getting up is a choice. Nothing is wrong with hitting a roadblock but it is how you go around it and keep going."

Poised to make her new dream a reality, Reid-McCalla says she would like to flourish as much as local businesswoman Jennifer Samuda, proprietor of Jencare has internationally.

"My dream now is to be like a Jennifer Samuda, where I will have my spa here in Jamaica and the Caribbean. My staff has to be professional at all times and every single client must feel special."

Despite her busy days, McCalla also makes it her duty to give back to her community through outreach programmes.

Still not giving up on her first love - music, the inspirational young woman insists that one day she will enrol in voice lessons.