Workers hope for NuLife after blaze 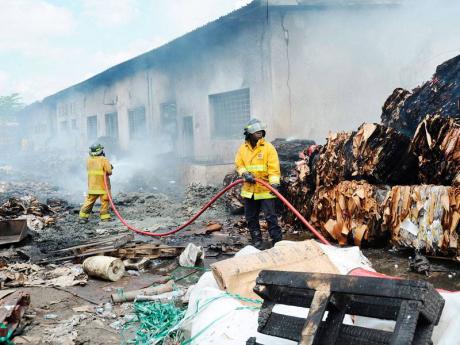 Uncertainty about where their next pay cheque will come from didn't stop workers of NuLife Recycling Limited from coming out early yesterday morning to earnestly get the clean-up work going.

The company, located on Carifta Avenue, off Spanish Town Road, was gutted in a massive blaze that started on Friday night but wasn't fully extinguished until close to noon Saturday. The smell of burnt plastic, mingled with the musty odour of various debris, as well as the mud created from all the water expelled from firemen's hoses, didn't make for an attractive work environment.

But the workmen were undaunted as they got out their brooms, shovels and wheelbarrows to get things back to normal. Nearly half the staff came out, some as early as 6 a.m., to lend a hand.

One of the overseers, Owen 'Matthis' Bowen, said the boss, Rohan Brown, deserved their effort.

"Him try him best fi mek everybody eat a food," Bowen said. "A one good man. Him do a lot inna di ghetto, like the back-to-school business, him help out. Him deal wid every likkle ting."

He said of the more than 60 workers, only about 13 were not from the nearby Waterhouse community. Bowen said workers and their families were taking the fire very hard.

"Dem bruk dung. Mi nah tell no lie still," he said. "But everybody jus' a try rally roun'. Wi a pack up weh wi can save, and throw weh wah haffi throw weh."

Today, being the start of the workweek, will be hectic.

"Some of the people weh wi tek tings from, wi cyaa jus' left dem dry so," he said. "If wi lef dem so, somebody else a go get it. So wi jus' haffi keep di ting going."

A company supervisor, Ian Brown, said they were trying to make the clean-up as quick as possible. He said some of the machines were saved, so the work, as much as possible, would go on.

The workers said they would be back by about 8 a.m. today to continue the clean-up.