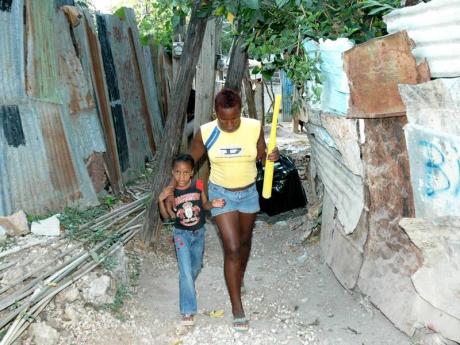 In his contribution to the Sectoral Debate in Gordon House yesterday, Minister with Responsibility for Housing Dr Morais Guy announced that the Government has made available $42 million through the PetroCaribe Fund for the zinc fence-removal programme.

"We have moved full speed ahead in continuing the push to eliminate this feature from sections of communities, particularly those in the Corporate Area," Guy told his colleague legislators.

Under the programme, first trumpeted by Patterson during the 1990s, the Government plans to remove zinc fences in inner-city communities, replacing them with concrete block walls one-point eight metres high, reinforced with steel.

Guy said priority has been given to areas where the need is most manifest.

As part of the programme, seven zinc fences along Payne Avenue in the South West St Andrew constituency of Prime Minister Portia Simpson Miller have been replaced.

At the same time, work on 16 other fences along Uganda and Lagos avenues in the same constituency has already started.

The minister, who presides over matters relating to housing, also announced that $3.5 million has been spent to extend and strengthen the perimeter wall at the Trench Town Comprehensive High School.

Success Basic School in Central Kingston will also benefit from the programme, with $2.7 million set aside for the construction of a concrete block retaining boundary wall.

The programme will also be rolled out on Haile Selassie Avenue, 263 Spanish Town Road, Maxfield Avenue and Bedward Gardens.