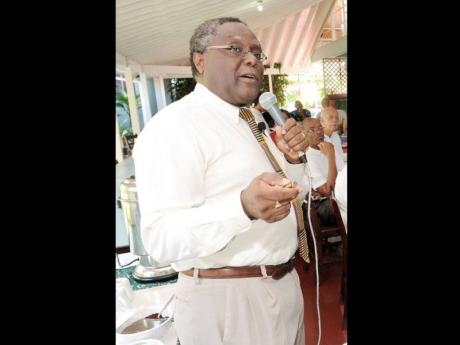 Amid a growing tolerance worldwide of the gay community, a local advocacy coalition has launched an impassioned defence of persons and groups pressing ahead with the condemnation of homosexual behaviour.

Dr Wayne West, chairman of the Jamaica Coalition for a Healthy Society, has declared that it is an insult, a great disservice and thoroughly unacceptable to label persons who are against homosexual behaviour as insane.

"To say persons who are against homosexual behaviour are homophobic is to say they have a mental illness. The very definition of phobia is an irrational fear of something. We are not mentally ill by any means, we are very rational," West told The Gleaner yesterday.

"Homosexuality is fundamentally discordant. It does not reflect a design in nature. There is a design in nature where men and women are complementary. We are against homosexual behaviour because it has negative consequences on society overall, it does not serve the common good. Data consistently shows that same-sex behaviour has harmful effects on both the persons involved as well as the society in general. Just look at the immeasurable data with the HIV/AIDS epidemic."

He added: "So to say we are all mad and irrational is an insult. 'Homophobia' was deliberately constructed by a psychologist to make persons against any same-sex act to have a phobia, which in medical language is a mental illness."

Yesterday the coalition took out a full-page advertisement in The Gleaner, declaring that 'Speaking Truth is NOT Homophobia', but that it is common sense, medical sense and economic sense.

Urging persons to reject the homosexual lifestyle, the advertisement quoted statistics from researchers at Johns Hopkins Center University for AIDS Research in the United States, published in the medical journals Lancet and AIDS Behaviour.

"We think it is important that in public discussion facts are brought to bear rather than simple ideology. And these are the facts that there is clear medical evidence that same-sex intimate behaviour among MSM is detrimental, these are the reasons why we reject it, not because we are all mad," West stated.

He said the main reason for the 'irrational' label was to silence the discussion.

"What we have found is that in countries where this political homosexual lobby is advancing, they seek to silence you. You are labelled as homophobic, you are mad, you are not worth listening to, your opinion is of no consequence. But these are fundamental sociological changes and we must have these discussions," he stated.

"Fight evidence with evidence. If you have a problem with what we are saying, then bring the evidence, don't just dismiss us as mentally ill."

He said the coalition chose to speak out at this time to add to the recent discussions surrounding International Day Against Homophobia and Transphobia, commemorated on May 17.

Efforts to get a comment from Dane Lewis, executive director of Jamaica Forum for Lesbians All-Sexuals and Gays, were unsuccessful.