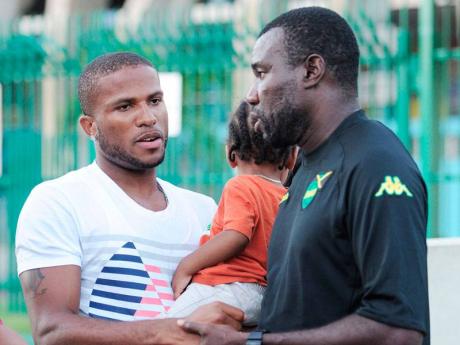 Reggae Boyz head coach Theodore 'Tappa' Whitmore (right) speaks with national defender Jermaine Taylor, as he holds his daughter, prior to the team training session at the National Stadium yesterday. 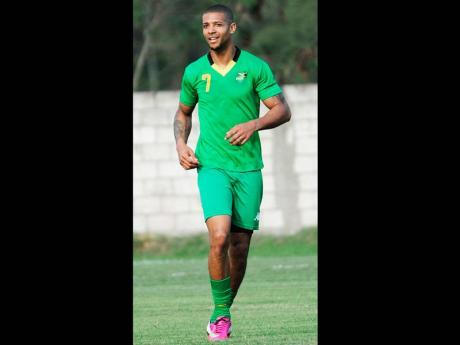 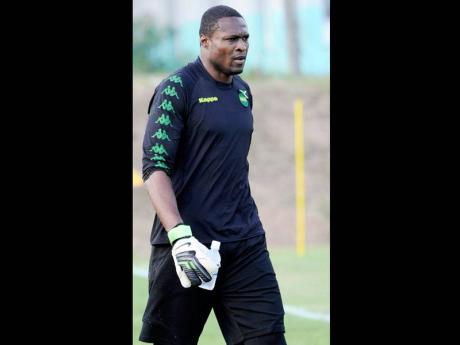 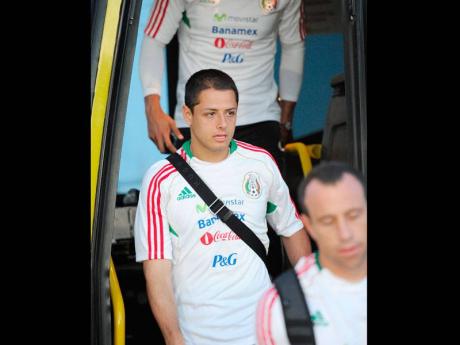 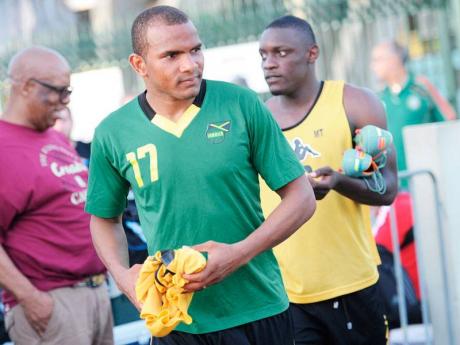 WIN is the word. That will be the target for Jamaica and Mexico too, when they clash today in a CONCACAF World Cup Qualifying (WCQ) football match at the National Stadium at 8:30 p.m.

Both countries are desperate for maximum three points to strengthen their goal of advancing to next year's World Cup Finals in Brazil.

After three matches, the Jamaicans are sitting bottom of the six-nation CONCACAF Hexagonal on two points, one behind the Mexicans.

Fortunately for both, in this tight elimination series, the other four contenders are well within reach. Panama lead with five points, followed by the United States, Honduras and Costa Rica, all tied on four.

Three teams will gain an automatic berth, while the fourth-place finisher will tackle Oceania champions New Zealand in a home-and-away play-off to also claim a spot in Brazil.

In 11 previous World Cup Qualifiers, Mexico hold the big advantage with seven victories, as opposed to Jamaica's two. Two matches have been drawn. In world rankings also, the teams are far apart, with Mexico ranked 16th and the Reggae Boyz 53rd.

However, in international football these days, statistics count for little.

The Reggae Boyz restarted training last Friday, following a 10-day training camp in The Bahamas, and the head coach, Theodore 'Tappa' Whitmore, expressed confidence due to the vibe that has engulfed his squad.

"We are confident because we know what we have to do, and that is to get three points ... that is very important for us, and so we are looking forward to a good game tomorrow," he stated.

Whitmore also noted that the Boyz are likely to feed more off this pressure situation, given the character of the Jamaicans.

"I think that it will be more pressure on the Mexican team than the Boyz," he pointed out. "This is our home game and we know what we have to do and I think the Boyz play best when they are in situations and conditions like this, and so I think it will be no different come tomorrow."

Neither the Reggae Boyz nor Mexico's El Tri have managed a win in this final-round series, in which each country plays 10 matches - five home and five away.

This will be Jamaica's second home game, matches that teams play harder to win because of the advantages from crowd support and other familiar playing conditions. It is for this very reason why the National Stadium has been dubbed 'The Office', given the efficiency with which the Boyz have often operated to craft favourable results.

Several things appear to the Jamaicans' liking, as far as getting the victory they crave this time; and there are other things that may affect their chances.

A historic 0-0 draw at The Azteca, which earned Jamaica their first point ever against the CONCACAF giants in their fortress, is providing much inspiration for the Boyz.

In that game, they also created a number of clear goalscoring chances, which fell to Ryan Johnson and Joel 'Jobi' McAnuff.

The former has not featured in games against Panama (1-1) and Costa Rica (0-2) since, but is expected to see playing time again with the nation's leading all-time scorer Luton Shelton not selected for this match, and McAnuff, a starter, pulling out of the match for personal reasons.

The unavailability of these players, as well as their inability to score chances created, fall on the Reggae Boyz's downside, which appears overbearing when adding other frontline players who will miss the match.

Whitmore is not worried about the defensive makeup.

"It doesn't really matter because we have to select 11 players to play against Mexico and we will be selecting and best and the strongest backline tomorrow," he said.

Additionally, Jermaine Johnson, the most dangerous midfielder, who ran hard at the Mexican defence in the opening game, and pacey midfielder/winger Dane Richards through injury - are also out.

The absence of Shelton, McAnuff, Johnson, Richards and Phillips could rob the team of its greatest asset - speed.

Recalled striker Darren Mattocks possesses a fair bit, but he looks likely to watch from the bench as Garath McLeary and Jermaine Beckford headline choices for the starting positions.

The major worries concern scoring and defence, where sizeable German-born central defender, Daniel Gordon, is favoured to be one of two international-game debutants. The other is schoolboy Alvas Powell.

These deficiencies will call for a bigger performance from the team's most experienced man in the middle, hard-working central defender Rodolph Austin, on defence; and passing king Jermaine Hue, should he figure off the bench, in offence.

Donovan Ricketts, who played big in the opening tie in Mexico and made some crucial stops, may be called upon to provide rearguard action of similar proportions, in a game where strategy will be crucial.

Jamaica played a largely counter-attacking game in Mexico and got a huge result.

At home, it is anticipated that they will attack more, which calls for greater coordination.

As suggested by their lowly positions, neither of the two teams has displayed exceptional form in the Hexagonal.

In the past two weeks, the combatants played a practice match, with Jamaica tying goalless with English Premier League outfit Tottenham Hotspur in The Bahamas; and Mexico tying an under-strength Nigeria team 2-2 in Houston, Texas. The Mexican team had a key player, Pablo Barrera, red-carded in that game.

Being that it was a 'friendly', Barrera is eligible for tonight's matchup and is expected to headline the Central Americans' quest for a win with Giovanni Dos Santos, Andres Guardado and the dangerous Javier 'Chicharito' Hernandez, who scored 18 goals for Manchester United this season.

The slippery Hernandez actually netted both goals against Nigeria and will have to be closely guarded if Jamaica's Reggae Boyz are to enhance their chances of achieving the target - a win against Mexico.