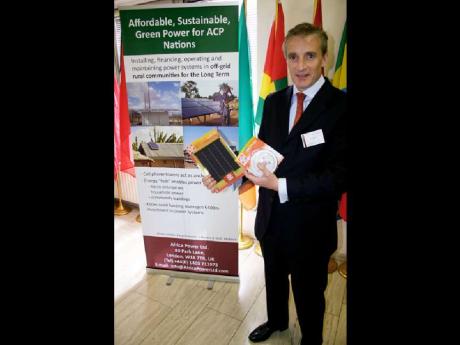 George Brennan, a director of Africa Power, shows off the very small solar panels and LED bulbs which are used in its off-grid power operations. - Photo by Christopher Serju

Using mobile telephone technology to energise rural communities is no longer a remote possibility. It is a reality which United Kingdom-based company Africa Power has introduced to Namibia and is seeking to expand elsewhere in Africa, the Caribbean, and Pacific regions.

On Wednesday, the company made a presentation at ACP House in Brussels, Belgium, where Director George Brennan shared with The Gleaner its vision for lighting up off-grid communities in a cheap, practical and sustainable way.

After signing a contract with mobile phone companies to supply electrical power to its off-grid towers, Africa Power then uses solar or hybrid sources to sell energy to the telecommunications operators. It then uses the towers as a hub to provide electricity to the local community, which is, of course, off the grid.

The main reason for the presentation at the headquarters of the African, Caribbean and Pacific (ACP) grouping, which was hosting a series of meetings, is to attract funding which Africa Power will use to then expand its operations to providing electricity for household use. The company hopes, as demand grows, this will lead to the development of businesses such as agricultural processing and storage, as well as powering drip-irrigation systems.

Once the operation is up and running, it makes for a much-improved standard of living, with the electricity cost much cheaper to consumers and safer than kerosene, according to Brennan.

He explained that having inked a long-term agreement for supplying electricity to the mobile phone company in Namibia, Africa Power will be there to maintain, upgrade and operate these systems over time.

Though still in its infancy, the director explained that the format has been tested and the potential for significantly improving rural life is enormous.

Where it has been tested, Brennan says the system has found favour with the telecoms companies, with the attendant positive spin-offs linked to the telecoms provider in the minds of residents of the beneficiary community.

While he wouldn't commit to a timeline for Africa Power venturing into the Caribbean, Brennan disclosed that the company has a representative for the region and the Pacific.