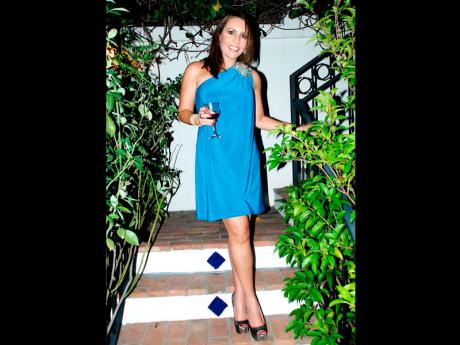 1. She was strongly resistant to the notion of ever getting married and having children, but is glad she did. She is a strict parent and does the disciplining, much to the dismay of her children, Joshua and Rebecca.

2. Kerr-Jarrett had no plans to read law and started reading politics for her first degree. She was encouraged by tutors in first year to pursue law as her main degree, because of her natural analytical skills and aptitude towards the subject. She went on to pursue the LLM and actually completed law school at the University of the West Indies. However, her passion ended up being business, particularly finance, and so she wishes she had pursued a business degree, at least an MBA.

3. She is not sentimental and rarely cries, but is near to tears whenever she hears the National Song, I Pledge My Heart (Words by Victor S. Reid/Music by Gustav Holst).

4. Kerr-Jarrett is determined but impatient, sometimes to a fault. She hates being kept waiting and hates shopping, so she does most of hers online.

5. She takes exactly 20 minutes to get dressed and apply her make-up (it's been timed). She looks forward to her leisurely bedtime ritual of a hot bath, scented with Joe Maloe Red Roses Bath Oil.

6. She is an avid reader who does not watch television, except as a lullaby to put her to sleep. But she recalls partying her way through London at all the famous nightclubs followed by breakfast at popular Middle Eastern restaurants at 6 a.m. This resulted in her having to redo her 'A' levels. Her parents blame it on being misguided by wealthy, spoiled Arabs and aristocratic friends. She saw it as her learning the way of the world. She has no regrets whatsoever!

7. Kerr-Jarrett has preached, taught and led worship and administered deliverance at church, and developed a love and compassion for all through the training and incredible experience received. Some of her best times are spent travelling around the community of Eastern Hanover and conversing with the residents. She says it energises her. It must be love.

8. She has a cordon bleu certificate in French cooking and spent a short period in Italy on an intensive History of Art tour, which encouraged a lifelong love for the country and fine arts. This was done as a diversion to the rigours and discipline of university academic life.

9. Kerr-Jarrett is a confirmed tomboy. She never had a doll, much to the dismay of her more 'girlie' sisters. She never wore a handbag or make-up until the ripe old age of 19.

10. She comes from a line of political activists. Her great grandmother was one of the first females to run as a candidate in the 1944 (adult suffrage) general election. She ran as an Independent candidate in St Catherine. She was also one of the first women to be elected to a parochial board (equivalent to parish council today), and one of the first female justices of the peace. She recently discovered an old news report that singles out her great granduncle as an infamous (in those days) advocate of equal rights and opportunity for every Jamaican.

Paula Kerr-Jarrett is among a group of post-Independence female professionals who have stepped forward and offered themselves as candidates for representational politics.

In the last general election, she contested the Eastern Hanover seat, going up against the seasoned Dr D.K. Duncan. Even though many credited her with the ability to pull off an upset, she came up short. However, she has not given up on representational politics, even though there are those who have advised her that she would have been better suited entering the political fray via the Senate.

An attorney-at-law, Kerr-Jarrett is a leading force behind and spearheading many charitable causes. Described as mercurial by some, she blames it on being born in the year of the Fire Horse, which only comes every 60 years.

Today, Outlook shares 10 things we did not know about Paula Kerr-Jarrett.