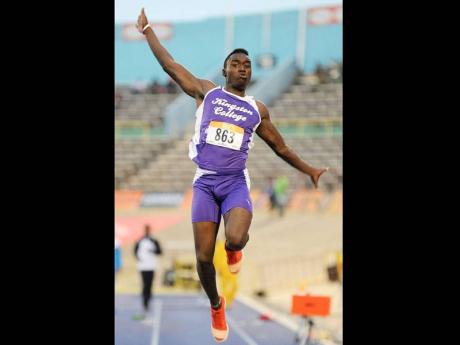 Clive Pullen of Kingston College wins the Class One boys' long jump at the 2013 ISSA/GraceKennedy Boys and Girls' Championships at the National Stadium. - File

AFTER a successful tenure at Kingston College, Clive Pullen, who captained his school at this year's ISSA/Grace-Kennedy Boys and Girls' Cham-pionships, will be leaving that institution to take up a full track-and-field scholarship at the University of Arkansas in August.

Pullen, who was the Class One long and triple-jump champion at Champs this year, and who was second in the Under-20 long jump and first in the Under-20 triple jump at the Carifta Games in the Bahamas, is very pleased of his achievements for Kingston College and is looking forward to collegiate competition.

"Whatever the coaches asked me to do, I was always willing to as they saw the talent in me. In the lower classes, I was successful in high jump and also had a second-place finish at Champs in the sprint hurdles," he said.

Pullen will be hoping to emulate some of his former teammates at Kingston College, including Tarik Batchelor and Alain Bailey, who have both left their marks there.

"In everything I put God first, and with him at the forefront, anything is possible. I am hoping to succeed at Arkansas as I am leaving an institution which is very productive and I just have to give it my all," said Pullen, who stated that there is no preference for any of the jumping events.

"The love is shared for both events (long and triple), and I will be continuing to do both in college," he said.

Pullen, who will be majoring in telecommunications, had some advice to young up-and-coming Kingston College athletes.

"Kingston College is the biggest institution and it is very productive. All you have to do is concentrate on your schoolwork and work with the coaches to give it your all, and live by the motto, 'Put God first and anything will be possible'," he added.