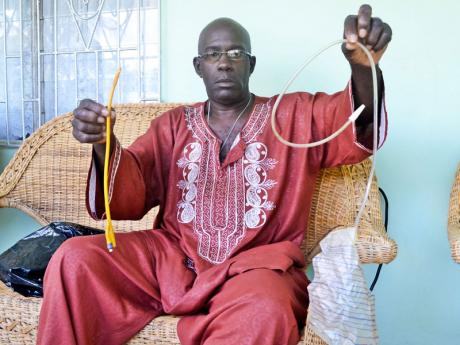 Norman Campbell with the catheter that he wore for a year.-PHOTO BY CARL GILCHRIST

BROWNS TOWN, St Ann:COLLOIDAL SILVER was used by doctors in the early 20th century, but after the development of more modern antibiotics, its use dwindled. Since the 1990s, however, there has been a resurgence of its use amid claims that it is a cure-all.

Colloidal silver is now in Jamaica and several residents who have used the product are reporting amazing health benefits, dubbing it the miracle water.

Among them is 56-year-old Norman Campbell, popularly know as Boy Blue, of Standfast district in Browns Town, St Ann. Campbell told The Gleaner that he had an enlarged prostate, but after taking the water in prescribed doses for three months, the problem went away.

Tzdhne Ishigyhd, a Rastafarian who lives in the Corporate Area, said she is a lupus survivor and since using colloidal silver, the disease has gone into remission.

Another woman, Erna Hunter of Steer Town, St Ann, said the miracle water has lowered her blood sugar level, got rid of pain in her legs, and got rid of her sinus-related problems.

Devon Hall markets the product from Browns Town, St Ann. He told The Gleaner he was introduced to it while he was living in London.

In 1995, while I was living in London my wife suffered with allergies and both of us had chronic sinus problems a gentleman from Iran introduced it to me. So we ordered two bottles and we took it, and since then, from 1995 to date, the problem has not reoccurred, Hall said.

In 2010, he started bottling the product locally, and the responses have been startling.

Persons have used the product and have returned to Hall with the news that their problems conditions such as enlarged prostate, arthritis, Type II diabetes, lupus, chronic sinusitis, ear infections, yeast infections, among several others are no more.

When The Gleaner caught up with Campbell, he spoke about his experience.

Mi did have a prostate problem: Mi prostate did swell. Mi did sick and inna di hospital. I was to operate on it in January this year, Campbell related.

He said after being discharged from the hospital, he had to keep wearing a catheter because he couldnt pass his urine naturally. He wore it for a year.

But late last year, something happened that changed his life forever: He met Hall, who introduced him to colloidal silver. He decided to try it. This was around October.

On January 17, five days before the scheduled operation at the St Anns Bay Hospital, and three months after he started taking the product, the catheter fell out.

Mi get scared and rush to hospital, Campbell said. The doctor checked me and say the prostate shrink back! Is just God and the water wha mi drink!

Prior to that, he said the pain associated with the enlarged prostate had disappeared. And it control mi sugar because Im diabetic. I recommend this to the whole world!

According to Ishigyhd: I started taking the colloidal silver earlier this year. I knew about it before but didnt know where to get it. I was still having symptoms of the lupus rash and a stubborn joint pain but I feel good now! They (doctors) tried to prescribe steroids, but I didnt like that, so the colloidal silver came along and speeded up the process.

Hunter said because of the pain in her feet, she could hardly walk at times. She is diabetic and also suffers from sinusitis.

At nights, I used to cough a lot because of the sinus, Hunter said.

She was introduced to the product by her daughter, who had heard about it. Hunter bought a bottle in January and within two to three weeks, she saw results.

The sinus gone, the pain gone, mi sugar (level) way down. I can walk go anywhere now because my feet dont hurt anymore. Its really good!

With all the positive feedback that Hall has been getting from the product, he was quick to point out that he was not a doctor nor pretending to be one.

Many people, since they have tried it, they have come back and say yes, it has made a difference in their lives. Its like a gift sent from God, Hall stated.