The madness of slavery and the human spirit 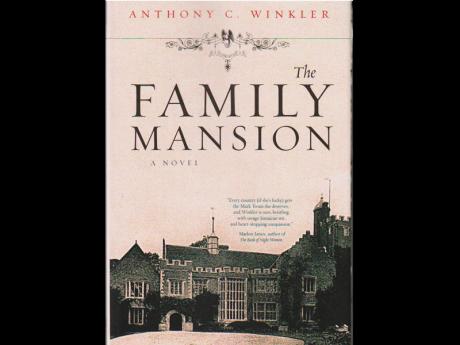 The Family Mansion bellows with the stench of misplaced pride. It is a showcase, no less, of two nations' growing pains, best reflected in the conflicting and oftentimes shadowy inner world of Hartley Fudges, its main character. The second child of an early 19th century British aristocrat, Fudges must fend for himself, the victim of primogeniture - a custom that champions the right of the first born to family holdings. It is a system that rips through any façade of morals hoisted on his person by Hartley. It exposes a malison - a tenebrous trait capable of plotting murder of his flesh and blood.

Winkler proves his salt, daring to weave slices of British and Jamaican history, and slavery's savagery on to a blaring tale that already stood on its own. He picks his spots. His timing is meticulous, narrating a history of woe with an effortless joie de vivre.

The Family Mansion offers invaluable historical data without an iota of dryness and ennui. Winkler's dance with the past is refreshing, adding additional body to an already hefty oeuvre. Hartley's character needs little buttressing. It resounds. An existential mess as a young man in London, he is forced into exile after his plan to assassinate his brother turns on its head. His is a story that fascinates and compels with all the elements to command unwavering attention - overarching venality, sexual debauchery, adventure and murder for hire. Hartley is a microcosm of a bloody nation, a putrid empire of ornate trappings and the glib of an unapologetic doyenne. Great Britain is living a lie. So is Hartley. That they are conjoined twins is closer to the mark, bereft of authenticity and humility. It is a miasmic existence, a warped reality; the stench of pride and prejudice; a duplicitous saga of greed, dehumanisation and wretchedness. He leaves for Jamaica, naïve but expectant.

Winkler's prosaic prowess never fails to impress even the mostseasoned of writers. "Although a young man, Hartley Fudges had already learned that the years do not pass at a uniformed pace, that some creep past like sickly turtles while others come and go with the thundering gallop of race horses," he pens.

Winkler's depicts a Jamaica, circa 1802, pulsating with the pangs of slavery and colonisation. It is a sore paradox, for against the backdrop of the island's untamed and majestic beauty is a system of dehumanisation. It is a time when theologians questioned the salvation of the slave who was believed to be void of a soul - an unquestionable beast. This is the world in which Hartley is trapped. It is here that he meets Cuffy, an enigmatic individual - contentious and arrogant, but having the paragon of a slave's mind and obsessed with aping the ways of the white man. Cuffy, once owned by a black man, prefers Hartley, his new owner. Ironic, but an ambivalence that has set the tone for an inferiority complex, perceived powerlessness and obsequiousness that have rattled colonised nations for decades, if not centuries to follow.

Winkler's details on the savagery of slavery, the religious colonisation and the insuperable will of the slave are hardly new and, by now, should be part of our collective memory. In one revolting and tragic circumstance, a dying slave - an Ashanti - prays for his ancestors to intercede on his behalf, only to be told by Hartley, "There is only God and that is Jesus. If he calls on Jesus, even at this hour, he will be saved."

Winkler presents a world enmeshed in trepidation and self-loathing by slaves and masters alike. Plantations are cocoons of destruction for every inhabitant.

For sure, Winkler offers an impregnable and daring insight into the psycho-sexual and cultural life of early Jamaica through the Mt Pleasant plantation and the lens of Hartley. In one wrenching scene of legal rape Winkler writes of the fear of a slave girl, "Now easy now Massa." But Hartley was not. "He plunged into her with a savage thrust of his hips. He slumped against her with a feral grunt. Then he remembered himself, and springing up, he pulled up his pants, jumped on the horse and galloped away."

Winkler's invokes the ghost of Nietzsche, tapping us on the shoulder. Pause, we must, if only for reflection. Are we engulfed in an existential lie? Why do we fold so easily to the archetypal reach of class, money and privilege? What becomes of Hartley's love with a slave girl and the bloody revolt led by no less than Cuffy, his former slave, will tug at our curiosity. But more important, The Family Mansion proves prophetic - an indictment on humanity offering a mirror, an invitation to examine our soul - if only we dare.