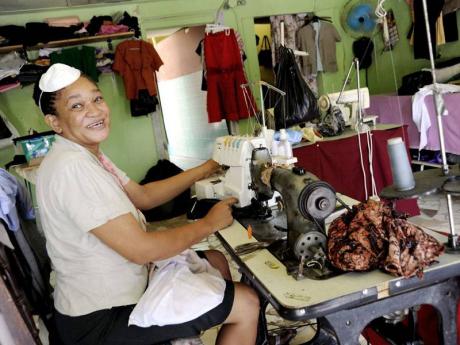 A smiling fashion designer Sandra Thompson is fearful another major flood in Port Maria, St Mary, will do more damage to her sewing machines and materials. - photos by Norman Grindley/Chief Photographer

"The water was about four feet high in my store. Two of my sewing machines got destroyed, one motor burn up," she recalled. Pointing to the machine she was working on, she explained "this one just fix and still giving problems".

"It (the floods) set me back a whole lot," she said, noting that she lost much of her material, including all her trimmings. "The customers were set back too so they weren't ordering much."

Thompson noted the town was below sea level and felt the flooding was partly the residents' own doing.

"People keep throwing rubbish into the river and the drains and that definitely help cause it."

But a grocery store operator who gave his name as Edwards feels that the problem has nothing to do with debris, but instead, the rocks that were put at the mouth of where the Outram River meets the sea.

"I've been here before the sea wall go up," he said. "Some of the rocks block up the exit."

He believes that with the construction of the North Coast Highway, smaller rivers were diverted to the main one that flows through the town. But the rocks stop the excess water from getting out.

"The town used to flood before, but it neva used to cover the place."

Other residents share his view, saying the rocks have outlived their time. They say some drain cleaning has also been done recently. Edwards recalled the floods after Sandy.

Because of the town's susceptibility to flooding, persons have put in measures to save their merchandise. Sam, who manages a furniture store, showed The Gleaner platforms used to keep the merchandise off the floor, in the hope future rising water would not ruin them.