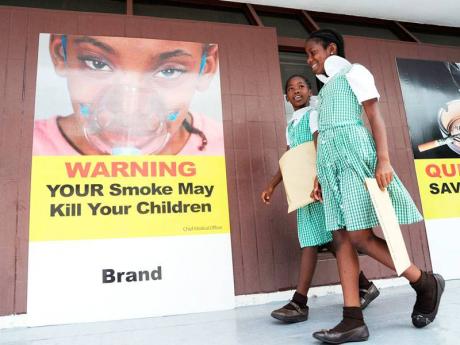 Students of St George's Girls' Primary and Infant School walk by a sign placed near the entrance to Gordon House by the Ministry of Health yesterday. The health ministry, in collaboration with the Jamaica Cancer Society and the National Council on Drug Abuse, set up an exhibition outside Parliament with a focus on cancer and the cessation of tobacco use to coincide with a Sectoral Debate contribution from Health Minister Dr Fenton Ferguson. - Ricardo Makyn/Staff Photographer

Describing it as the most far-reaching piece of public health policy undertaken in recent times, Health Minister Dr Fenton Ferguson has announced that as of July 15, no smoking will be permitted in public spaces across Jamaica.

In making the announcement in the House of Representatives yesterday, Ferguson said smoking would be banned in all enclosed places, public transportation, workplaces, government buildings, health facilities, sports, athletics and recreational facilities, educational facilities, areas specifically for use by children, and places of collective use such as bus stops.

Ferguson told Parliament that the Government had developed a new regulatory framework - the Public Health (Tobacco Control) Regulations 2013 - and that he used his power as minister to impose the ban.

The minister told legislators that smoking has been a major contributor to deaths on the island and said smokers are victims of their practices. He said tobacco smoke is a toxic mix of more than 7,000 chemicals of which 70 can cause cancer.

The minister told fellow legislators that he took his responsibility to deal with the protection of the health of the people of Jamaica seriously.

"I am not just anti-smoker, I am rather pro-health," Ferguson said.

He noted that tobacco kills up to half of its users and "is the only industry that kills its best and most loyal and faithful customers".

He said tobacco kills nearly six million people each year, including more than 600,000 non-smokers exposed to second-hand smoke. He also said approximately 80 per cent of the world's one billion smokers lived in low- and middle-income countries like Jamaica.

The quest to ban smoking in public places gained momentum in the former administration when Rudyard Spencer was minister of health.

"He tried his best," Ferguson said in acknowledging his predecessor's efforts.

Ferguson, speaking with The Gleaner following his presentation, said the move was a major victory in the fight against cigarette smoking.

"It represents one of the more far-reaching public health decisions in decades. This is about protection of public health."

Using the example of veteran journalist, the late John Maxwell, who died from lung cancer caused from years of cigarette smoking, Spencer said the ban "is almost literally protecting persons from themselves".

In the meantime, Spencer told The Gleaner that he welcomed the banning of smoking in public places, saying that extensive work had been done by the former administration. He expressed delight that Ferguson was able to clear legal obstacles to allow for the imposition of the ban.

"It is long in coming, but I am glad it is finally here," Spencer said. The South East Clarendon MP shared Ferguson's view that the ban on smoking in public represents a major victory for public health.

"For the first time you are actually forcing people to adhere to a policy that is in the long run to their greater good," Spencer said.