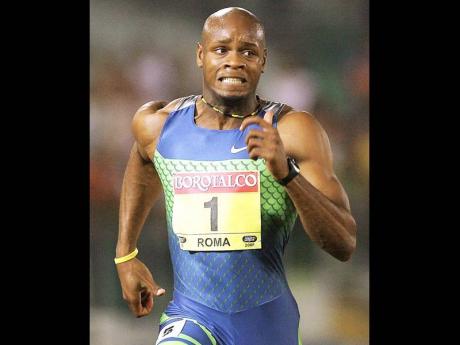 Former 100m world record holder Asafa Powell may have finished down the track at the recent Jamaican trials, but the 30-year-old remains motivated, as he targets a sub-10 seconds clocking at the Ostrava World Challenge meet today.

Powell finished seventh in 10.22 in the 100m final at the Jamaica Athletics Administrative Association/Supreme Ventures Limited National Senior Championships last Friday. However, the powerful Jamaican is not holding on to the disappointment and is looking to bounce back right away in the Czech city.

"I knew what happened at the Jamaican trials. I am not worried about that. I didn't run what I want to and expect from myself. I wasn't race ready. It was not my day. A time of 9.99s, which was enough to qualify for the World Championships in Moscow, is like walking in a forest for me," Powell told journalists in Ostrava.

Powell will face a solid field with Mike Rodgers - the fourth-fastest man in the world so far with a best of 9.96, veteran Kim Collins, Jimmy Vicaut, Dwain Chambers and young British sprinter Adam Gemili, all expected to face the starter.

However, the MVP Track Club star said he is hoping that the competition will help him to dip below the 10-second barrier - a target that he says remains a constant source of motivation for him.

"It is very important to run under 10s. If you cannot make it, you cannot be in the top group. So, that is also huge motivation for me," Powell added. "I am in good shape now, and I have always been running very fast in Ostrava. I used to run good here."

Powell also turned his attention to Usain Bolt, who won the 100m at the trials in 9.94, noting that he believes his compatriot is still the man to beat, while pointing to the support that he himself has been receiving at home.

"Usain (Bolt) is still here, still in good shape. But he is getting older, so he cannot do the same he used to do before, when he was young," said Powell. "In Jamaica, it is quite different. Of course, Usain Bolt is the most popular, but people know and also like other athletes. And I am also their gold baby. They admire me and are my huge fans."