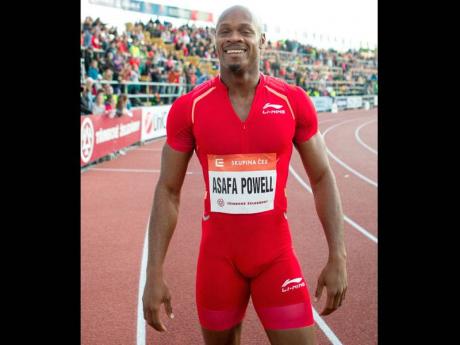 Jamaican speedster Asafa Powell returned to the track for the first - well, second - time since his shock seventh-place finish at the Jamaican nationals with a 10.06 seconds win in the 100 metres at the Golden Spike IAAF World Challenge meet in Ostrava yesterday.

Powell actually sprinted across the line in 9.97 in an earlier start some 30 minutes prior, only to realise that the race had been called back because the Cayman Islands' Kemar Hyman had false-started.

The Jamaican returned with the rest of the pack later on to win ahead of veteran Kim Collins, 10.08, and Mike Rodgers, 10.16.

However, Powell, who ran 10.22 at last week's trials to finish outside of the automatic spots for selection on Jamaica's team to the August 10-18 IAAF World Championships in Athletics in Moscow, was left disappointed with his outing.

"I was a little disappointed the first run did not make out. I'm happy to win but not satisfied with the time," Powell said after the race.

Sprint hurdler Andrea Bliss has experienced a resurgence under the guidance of hurdling guru Fitz Coleman. She posted a personal best 12.82 for second place at the recent Jamaica trials, dipping below 13 seconds for the first time since 2009.

In Ostrava, Bliss stopped the clock at 13.03 to finish behind Olympic and world champion Sally Pearson, whose 12.67 was her best time so far this season. Home girl Lucie Skrobakova, 13.02, edged Bliss to the line for second place.

"The time is a good sign for the world championships in Moscow, but I definitely wanted to run faster," said Australian star Pearson after the race. "I haven't competed for 11 months, therefore, I'm satisfied with the result."

Bliss will now turn her attention to this Sunday's IAAF Diamond League stop in Birmingham.

National champion Ristananna Tracey was a fourth-place finisher in the 400m hurdles, her time of 55.98 keeping her behind the winner Zuzana Hejnova, 53.32; Denisa Rosolova, 55.12; and Lauren Boden, 55.55.

Young quarter-miler Peter Matthews finished down the track in seventh place with a time of 46.68 in the 400m. The event was won by Olympic and world champion Kirani James in 44.49 ahead of Wade Van Niekerk, 45.09, and Pavel Maslak, 45.22.