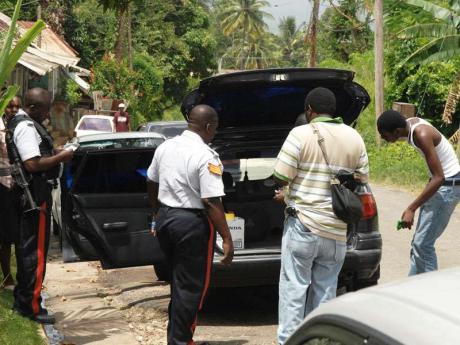 A Supreme Court judge has ruled that the police have no power, under the Road Traffic Act, to arbitrarily stop and search motor vehicles, opening the door for a flood of lawsuits.

The police have repeatedly argued that the law gives them the power to stop and search vehicles, and that this has resulted in the apprehension of criminals, the recovery of stolen vehicles and stolen farm produce.

But Justice David Batts says the police are abusing this power.

Batts made the ruling when he ordered the Government to pay $2.8 million in damages to a motorist who was assaulted by the police when he was stopped in St Catherine in May 2007.

Batts emphasised in the judgment that lawful reasons must be given by the police for stopping and searching a motor vehicle.

Batts has directed the registrar of the Supreme Court to send copies of the judgment to the Office of the Commissioner of Police and to the commissioner of the Independent Commission of Investigations for action to be taken, as seen fit.

The judge said there was some belief that Section 58 of the Road Traffic Act gives power to the police to stop and search vehicles without reasonable cause.

"That act does no such thing," Batts said in the judgment.

He explained that the act allows for the redirection of traffic or stopping of vehicles for the purposes of traffic flow or some reasonable purpose.

"The request for documents and driver's licence similarly follow on some existing cause, such as a reasonable suspicion that a crime has been or is about to be committed.

"The reasonable cause to suspect that an individual has or is about to commit a crime must relate to peculiar characteristics of the persons or the vehicle he is driving, or the manner in which it is operated, or to information received," said Batts.

He said further that in Jamaica, the citizen is free to move about without an obligation to carry a pass, and is not to be subject to arbitrary or random searches.

Batts noted that this was still a
constitutional guarantee.

"I find it necessary to
quote the Constitution and to recite its abbreviated history because of
some surprising features of this case.

"Surprising,
because when the evidence from the defendant was completed, the matter
of a lawful reason to stop and request a search of the claimant's
vehicle had not been addressed.

"Indeed, the
attorney-at-law representing the Crown, when asked, stated that
reasonable cause was the fact that the police were conducting random
searches for guns and drugs.

"It is the casual
attitude by the defendant and its witnesses to the individual's right to
freedom of movement, freedom of the person, and freedom from search,
which has caused me to restate the source of these rights and the
history of struggle to attain them.

"It bears
repeating that while lawfully driving his motor vehicle, the claimant
was exercising his right to freedom of movement and was entitled to
expect that that, as well as his other rights, would not be interfered
with without lawful excuse.

"Let me say further that
even on the account given by the defendant's witnesses, no lawful reason
is given for stopping the claimant's vehicle. Nor is there any lawful
reason advanced for the desire to search his vehicle, or for the alleged
request for his documents.

"It is still the law of
this nation that persons under The Queen's peace are entitled to freedom
from search of their person or property unless such a search is legally
justified.

"I hold that it is not a lawful reason to
stop and search a car based on the fact that cars with similar features
are often stolen and used in the commission of
crime.

"It would really be no different saying that an
individual walking on the road bears 'similar features' to the majority
of persons convicted of crime … [such as] 'He is of dark complexion and
wearing shorts below the waist'," said Batts in the
judgment.

Gary Hemans, a taxi driver who was
represented by attorney-at-law Sean Kinghorn, had sued the attorney
general to recover damages arising from his
ordeal.

Hemans testified that he and other family
members were coming from the Hellshire Beach in St Catherine on May 16,
2007, when they were stopped at the Hellshire roundabout by three police
officers.

He said when he enquired why they were so
aggressive, he was beaten and taken to the Portmore Police Station,
where he was locked up until the next day.

Hemans said
that at the station, he was forced to strip and squat in a corner, and
he felt humiliated and embarrassed.

He said he was
charged with assaulting the police, using abusive language, and using
indecent language.

The taxi operator attended court
several times, but the case was dismissed for want of prosecution
because the police did not attend.

Batts awarded
Hemans aggravated damages of $1.2 million for being forced to strip and
stoop at the station, and due to the fact that the police officers did
not attend court.

He was awarded $200,000 for
exemplary damages, because he was beaten without cause and made to
suffer indignities.

The Police High Command is still studying the
judge's ruling.