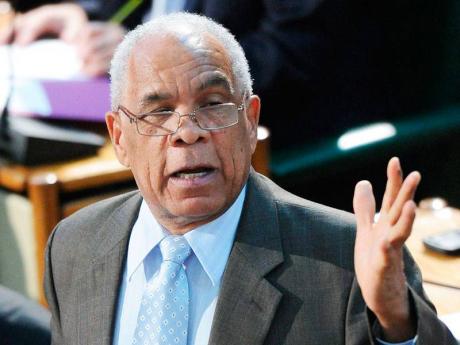 WHEN Transport, Works and Housing Minister Dr Omar Davies closes the Sectoral Debate in the House of Representatives tomorrow, the benediction might be pronounced on the existing format.

According to House Leader Phillip Paulwell, the current structure has been an inefficient use of parliamentary time.

"I believe this has to be (the last time for this structure), especially in light of the disinterest (sic) and the fact that presentations tend to be too lengthy," Paulwell told The Gleaner.

The Sectoral Debate allows all members of parliament (MPs) a platform to speak on a wide range of subjects. Although the speaking time for members is dictated by House rules, additional time is normally given.

Many persons have criticised the effectiveness of the exercise, with MP Everald Warmington, who represents South West St Catherine, saying it is a grand waste of time.

"I can't subject myself to the type of torture and rubbish that they call presentations, whether from ministers or backbenchers," he said.

He added: "We should bring bills and policies and programmes for the betterment of the Jamaican people and stop wasting time with the Sectoral Debate."

Yesterday, Paulwell said it was time to reform the Sectoral Debate to ensure better use of parliamentary time while getting maximum benefit from the presentations.

"We have to move to the place where the debate is used to focus on major policy development," Paulwell said.

Davies will call curtains on the debate, which he opened two months ago. His address will come after presentations from Dr Wykeham McNeill, the minister of tourism and entertainment; Horace Dalley, the minister without portfolio, with responsibility for the public service; Dr Ken Baugh, MP for West Central St Catherine; and Damion Crawford, minister of state in the Ministry of Tourism and Entertainment.

WORK TO BE DONE

In the meantime, Paulwell said he intended to have the House clear all outstanding private members' bills before the summer recess.

There are currently 19 private members' motions on the Order Paper, among them a call from Baugh, who is also opposition spokesman on health, for the establishment of a joint select committee to evaluate the extensive reviews which have been done on Jamaica's user-fee policy at public health facilities, as well as to examine ways to achieve comprehensive universal health coverage, making it affordable to the all Jamaicans.

West Kingston MP Desmond McKenzie has a motion calling for the Government to take immediate steps leading to the drafting of the necessary legislation for the mandatory evacuation of persons in areas threatened by natural disasters; the forced removal of persons who refuse to relocate from areas that are constantly endangered by disasters; and the creation of no-building zones to ensure that no physical development that will endanger life and property takes place within these zones.

Dr Lynvale Bloomfield, the MP for East Portland, last week told The Gleaner that he believed the Parliament should sit for extended hours to do the people's business.