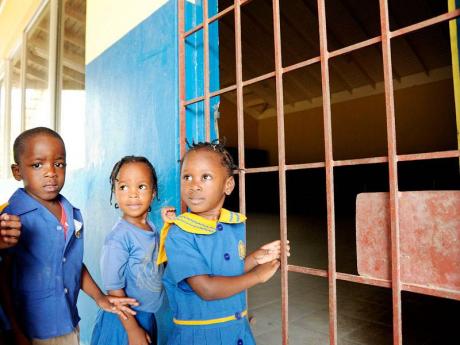 Students at the Cedar Grove Basic School look at an empty classroom that will be housing some students of the new Cedar Grove Academy until construction of the new high school is completed.

Concerns are mounting as the education ministry scrambles to find places for the 100 students who have been placed at the Cedar Grove Academy in Portmore, St Catherine.

The ministry said it has made arrangements for the students, who sat the Grade Six Achievement Test (GSAT) this year, to occupy the nearby Gregory Park New Testament Church of God and the Cedar Grove Basic School.

However, several persons are expressing concern that the ministry has not fully worked out the logistics of having the school up and running come September. They say the spaces at the church and the basic school could not adequately house the pupils until January next year.

Education Officer Shellion Burrell, who was by the church setting up a temporary office yesterday, said the church would be used for any general assembly and teaching purposes, while the rooms by the basic school have already been identified to be utilised as classrooms.

She said arrangements are also being made to set up temporary facilities to provide enough sanitary facilities and recreation areas for the children.

Meanwhile, principal at the Cedar Grove Basic School, Shanika Clarke, said parents are already threatening to move their children from the basic school. She said the parents are concerned about the high-school students being placed on the same compound with approximately 200 basic-school pupils.

Clarke said the ministry has proposed to use an empty computer room and a storage facility at the basic school to house two classrooms. She said there are also two unused bathrooms on the compound that can be used.

However, the principal said she has already expressed her concerns to ministry officials about her students interfacing with the older children.

She said she was in dialogue with the concerned parents, but they are not convinced the arrangements have been fully fleshed out.

Clarke said she was hoping the ministry would meet with the parents in short order to address their grouses.