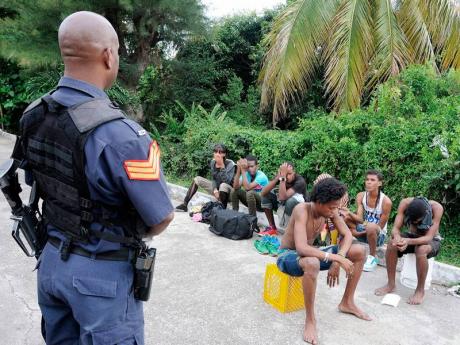 A policeman stands watch over some of the men who were removed from a house on Millsborough Avenue in St Andrew yesterday. - Gladstone Taylor/Photographer 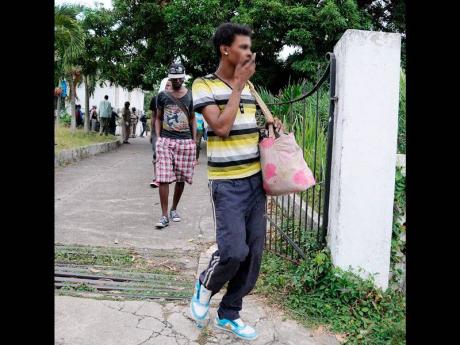 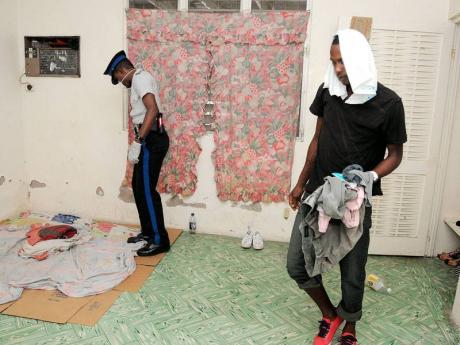 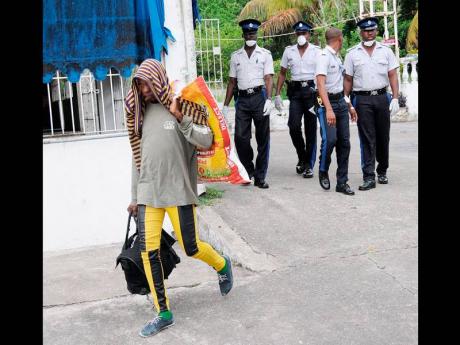 Police monitor as some of the men who were squatting at a house on Millsborough Avenue pack their possessions and leave the premises. - Gladstone Taylor/ Photographer
1
2
3
4

Members of a gay clan wept with despair late yesterday, after a large contingent of police booted them from a previously abandoned house in upscale Millsborough Avenue, St Andrew, in which they lived after fleeing from the Golden Triangle.

"If mi go back home, mi dead," wailed one young man, whose face was bleached white, not unlike other members of his group.

The team of lawmen, wearing dust masks and armed with high-powered weapons, encircled the men in spectacular fashion and herded them out into the yard as they attempted to make their escape.

"Mi a beg you a week to find somewhere else," pleaded another. "Why the picture (photographs)?" he protested, as a team of journalists and photographers accompanied the police party on the premises.

The police told The Gleaner the building would be demolished today, after residents complained that the men have been wreaking havoc in the usually quiet neighbourhood.

"This location will no longer be habitable because things will change," said Island Special Constabulary Force commander for the New Kingston Police Post, Christopher Murdoch.

But even as the talkative young men beseeched the police for a chance to remain on the premises for a while longer, they also vociferously sought to distance themselves from rampant perpetrators of a range of crimes, who lurked within their midst.

"Mi willing to push out who a cause the problem," declared one young man, aged 20, who said he was kicked out of his home in Spanish Town, St Catherine. "Mi nah rob and mi nah tief and mi nah go no jail for nobody."

Another man, who said he lived with his family in Spanish Town, confessed that he had to flee from his community after a tape was shown of his admitted sexual escapades in the community.

"Some man shoot after mi and mi have to jump into bush," he said, as he sought to explain why he sought refuge in Millsborough.

The man, who appeared older than others in the group, said he was overpowered by other men after he sought to put an end to the criminality.

'Dem overthrow me," he declared.

Another young man told The Gleaner he was from central Kingston.

Yet another declared he was booted from Allman Town, and another claimed he lived at Maxfield and as far as Montego Bay, before they were forced out of their communities.

One of the men listed 'Batman', 'Tito', 'Pebbles', 'Goodas Andrew', 'Nicholas' and 'Blue' as some of the perpetrators of robberies and assault in the community.

"Dem causing di violence and when mi talk to dem about it, dem buy cutlass to chop mi up," the young man complained.

Murdoch confirmed the men named were persons of interest.

Batman, described by the police as one of the most notorious of the hoodlums, has been accused of holding up and robbing a Caucasian male of an undetermined sum of US dollars in New Kingston recently.

As they sat beside a white Nissan Tiida motor car, which was parked in the yard, the men said they were cooking when the lawmen arrived.

As they pleaded their case, they referenced a man who had been chopped by his crony and was released from hospital yesterday.

The men were also accused of vandalising and robbing business places.

"Mi never rob yet and mi nah go jail fi nobody … . Yuh have good cop and yuh have bad cop, is the same way yuh have good gays and bad gays," he argued.

When Murdoch asked for the location of the men who were accused of wreaking havoc in the community, he was told that they would return to the house after dark.

"Dem not coming until yuh gone. Dem only sleep here a night."

But even as they pleaded their case, they were ordered by Murdoch, under the watchful gaze of other policemen, to pack their bags and leave the premises.

The Gleaner was told that the group had first ventured to 9 Ruthven Road before drifting to Cargill Avenue, then Waterloo Road, into the vicinity of Seymour Avenue, then on to Hopefield Avenue and into Millsborough.