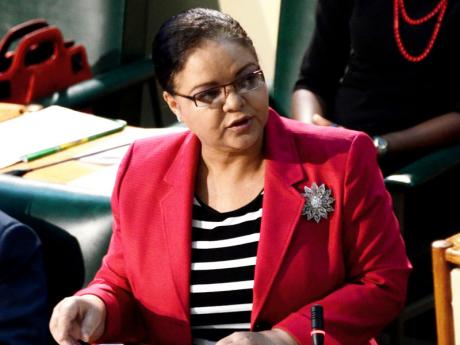 While declaring that the Portia Simpson Miller-led administration would never resort to state censorship, minister with responsibility for information, Sandrea Falconer, has urged the media to establish their own self-regulatory body.

"I don't believe in any state regulation or censorship. I am against it and this Government is opposed to that. We will never go that route. The media must self regulate," stressed Falconer.

She was making her contribution to a debate in the Senate last Friday on proposed legislation to repeal the Defamation Act and the Libel and Slander Act.

Senator Falconer pointed out that nearly 50 years after local journalists developed a Code of Ethics, there is still the absence of a media or press complaints council.

According to the Senator, there is the need for a self-regulating body in the media where members of the public could seek redress for harm to their reputation, without recourse to the courts.

She reasoned that many persons had legitimate complaints about an "imperfect press" but had no means to seek redress because of their economic or other limitations.

Falconer stressed that there was the need for a self-regulated media complaints council to which persons could go to have their grievances addressed.

"It is not asking too much of a media which must themselves be accountable to the people.

"We are passing this bill and giving more power to the media. The media must in good faith reciprocate by setting up mechanisms to empower the people."

Debate on the bill was suspended until next week to give senators who were not in attendance on Friday an opportunity to make their contributions.

Some critical features of the bill are the abolition of the distinction between libel and slander and the establishment of a single cause of action to be known as defamation.

The bill also seeks to abolish the law relating to criminal libel.

Other provisions include the reduction of the limitation period for actions in defamation from six to two years, the resolution of disputes without court proceedings, and the introduction of the defence of innocent dissemination.