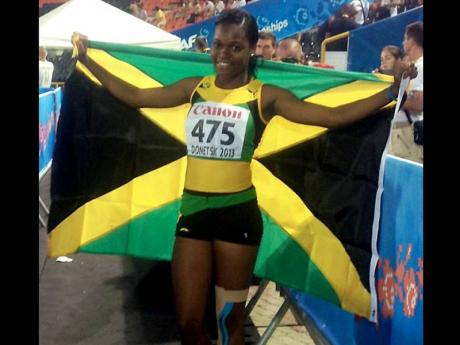 Jamaican sprint hurdler Yanique Thompson turned in one of the greatest performances ever seen at the IAAF World Youth Championships (WYC), smashing a 14-year record and bagging Jamaica's first gold medal here at the RSC Olympiyskiy.

The youngsters will be on the hunt again on today's third day of competition with four Jamaicans competing in finals and semi-finals, looking to add to the medal tally.

The 17-year-old Holmwood Technical student stopped the clock in a jaw-dropping 12.94 seconds to win the 100m hurdles final, in the process becoming the first Jamaican 100m hurdles gold medallist at the WYC, and the first to hold a world record in the event at any level, after bettering Adrianna Lamalle's 13.08, which was set in 1999.

Her compatriot, Rushelle Burton, barely missed out on a medal. She did a personal best 13.32, which gave her fourth behind silver medal winner Dior Hall, 13.01, and Mikiah Brisco, 13.29.

"It's amazing!" exclaimed a stunned Thompson, Jamaican flag draped around her waist and eyes wide with excitement.

"I wanted to get that gold medal. This is my last year as a junior and I didn't want to leave without something," added the Spanish Town native.

Thompson's run was the brightest spark in a mixed day for the Jamaicans, who for the third time in the eight-year history of the WYC, failed to win a medal in the 100m.

"It's a big disappointment for me. I have been struggling with my start since I got here. I will just have to refocus for the 200m now," said a disappointed O'Hara after the race.

Both Saqukine Cameron and Jonielle Smith got stuck at the semi-final stage of the girls' 100m, Cameron finishing fourth in her race with a time of 11.83, while Smith could only manage 12.01 for her sixth place in another semi-final.

Rochelle Frazer was not at her best in her ground-breaking appearance in the girls' shot-put final as her best effort on the day of 14.46m, which came on her second attempt, landed her in 12th position.

Quarter-milers Tiffany James, Martin Manley, and Devaughn Baker will all be competing for medals today after contrasting semi-final performances yesterday.

James, 53.70, for the third-fastest time going into the final and Manley, 46.65, with his second successive personal best, were impressive in qualifying for the 400m finals, while Devaughn Baker, who finished third in his semi in 46.78, had to endure a nervous wait before being confirmed as one of the fastest losers.

Jaheel Hyde helped himself to a 13.47 personal best and will line up in today's 110m hurdles semi-final with one eye on tonight's final. However, Jordan Chin had a disastrous second phase of his heat, crashing into the last three hurdles and finishing sixth in 14.46.

Christoffe Bryan is through to tomorrow's boys' high jump final after barely breaking a sweat in qualifying, clearing 2.09m on his first attempt.