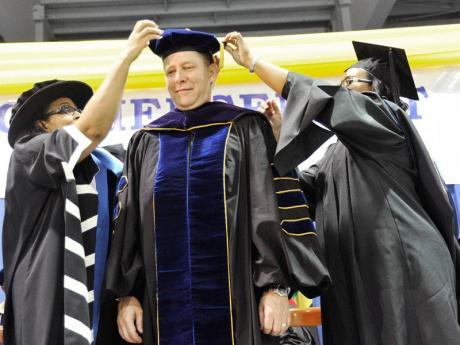 Bruce Bowen, president and CEO, Scotiabank Jamaica, is robed by Geraldine Adams (left), CEO of the University College of the Caribbean (UCC) and registrar Deborah King-Murray during the college's 2013 commencement ceremony at the National Indoor Sports Centre in St Andrew, yesterday. Bowen was this year's UCC commencement speaker and recipient of the honorary doctor of laws degree. - Norman Grindley/Chief Photographer

The head of one of the country's largest financial institutions yesterday asserted that the gap between the rich and the poor in Jamaica is widening and warned that this is cause for concern.

Bruce Bowen, president and CEO of Scotiabank Jamaica, made the assertion as he sought to underscore the myriad challenges which the country faces.

"Over the last many decades, the gap between the haves and the have-nots has been growing," said Bowen as he addressed the University College of the Caribbean's 2013 commencement ceremony at the National Indoor Sports Centre in St Andrew.

"Those of us who have should be concerned because too many people are living in conditions that are unacceptable," he added.

Bowen, who is also the president of the Jamaica Bankers Association (JBA), said after more than 25 years of anaemic economic growth, unemployment in Jamaica is too high.

"And that will impact everyone of you and it will impact your ability to achieve your career goals," he told the graduates.

The Scotiabank head said despite having some of the best doctors in the Caribbean, the quality of the country's health care is compromised "by a lack of money to be invested in facilities, equipment and supplies".

He noted the reduction across nearly all categories of major crimes, but said the numbers "continue to be too high".

Bowen also lamented what he described as bureaucratic and inefficient government departments and public bodies.

"That's not the fault of anyone, but it breeds a culture of under-the-table payments to get things done ... and those are things we should not be tolerating," he cautioned.

The JBA president said against this backdrop, it would be easy to believe that these challenges are insurmountable, but pointed to the country's strong global appeal.

"Any commercial enterprise would die for the brand we have," he said.

Bowen said overcoming these challenges requires strong leadership across all sections of the society.