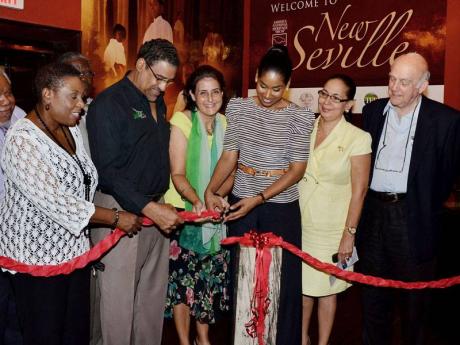 The site where one of the most important encounters among the peoples of the Americas took place is now home to a 21st century interactive state-of the-art exhibit, boosting Jamaica's heritage tourism.

The TEF's $14-million contribution has been hailed as significant to the preservation of the country's historical and cultural heritage by McNeill. He said the money was used for the complete refurbishing of the historic plantation building, which houses the Seville Museum, and part-funded the exhibition, which depicts the Spanish period in Jamaica.

Pointing to the strong link between culture and tourism, McNeill added: "Tourism and our heritage go hand in hand because it defines us as a people and as a nation. I firmly believe that as global travellers increasingly demand interaction with an authentic Jamaican experience, then it becomes more evident the ways in which we need to develop and showcase our heritage sites as part of the tourism product."

Come July 31, the eve of Emancipation Day, the park will again host the country's National Emancipation Jubilee celebrations, an event visitors have gravitated towards over the years.

Seville forms part of the strategic vision of the Ministry of Youth and Culture to spark a cultural revolution in the Jamaican society which will see more people knowing and appreciating the totality of the country's history, culture, and heritage. "We are resolute in our mission to teach our children and future generations about themselves and to achieve the cultural policy objectives of creating an even stronger national identity among our people," said Hanna.

The Seville Exhibition joins the Permanent Exhibition at Roxborough in Manchester, opened on July 4, which immortalises the work and contribution of National Hero Norman Washington Manley, Hanna told the gathering, adding that the rebranded National Museum of Jamaica will also open, on July 21 in Kingston, with the National Museum of the West to follow in Montego Bay.

Spanish Ambassador to Jamaica and President of the Spanish-Jamaica Foundation, Celsa Nuño, pledged her country and organisation's ongoing support to strategically placing the historical landmark as a major national and regional cultural, educational, and tourist attraction.

"I see this site as one where children are able to walk the pathway of history," she said, adding that 50 per cent of the visitors to any country are interested in at least one culture-related attraction.