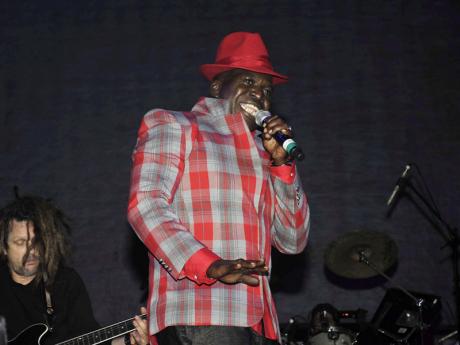 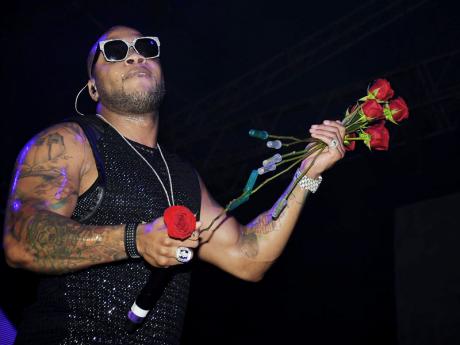 Flo Rida gives out roses during his performance at Reggae Sumfest's International Night 1 on Friday.-Photo by Claudia Gardner 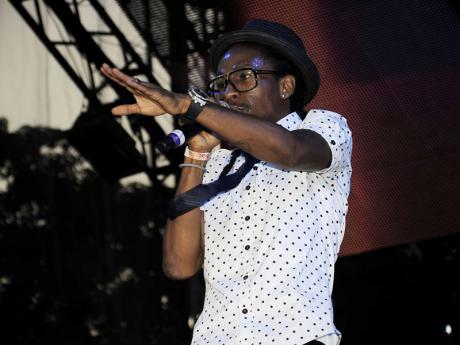 
Flo Rida holds his own among plethora of stars

When Montego Bay homeboy and Downsound Recording artiste, Nature took to the stage shortly after 10:30 p.m., his performance gave an indication of what was to come over the remaining eight hours. His mellow voice, complemented by his onstage antics compelled the audience to focus on the rising star, who belted out some of his hits.

But it was also his commentary on society's ills that caught the audience's attention.

"Trample the heathen," he said at one point, as he jumped high in the air three times in succession, while stomping the stage, immediately launching into his most popular hit to date World Peace.

"Move from yah so crime," he said, before giving a powerful kick to the microphone stand he was using, sending it skidding across the stage.

Iba Mahr was calm and cool in his performance, and along with Nature were the most outstanding new acts on the Sumfest stage, Friday night.

The two were preceded by performances from Kiara Dubwah, Sophia Squire and Droop Lion. Their stints were well received, although the crowd was not very large at the time.

Droop Lion was the third artiste to take centre stage. Upon being announced by MC Elise Kelly, he galloped onstage in a white papal robe, complete with a red, green and gold scarf and leather sandals. He danced and pranced all over the stage while swinging his dreadlocks, as photographers struggled to get shots of him and videographers swung their video cameras wildly to keep up with his pace.

Droop Lion did a slew of renditions ranging from Freeway, to a rendition of Tracy Chapman's Talkin' Bout A Revolution.

Barrington Levy was on a mission. Clad in a red felt hat and a plaid red and grey jacket, he took patrons to 'Dancehall School'. His voice was impeccable, and as melodious as it was decades ago when he emerged on the music scene.

Money Move and Murderer were also among the barrage of hits Levy sang, the audience singing every note right along with him.

However, about 10 minutes into his performance he expressed his displeasure with the artificial fog which was being filtered onstage.

"Whoever is doing this false smoke, I don't need it. It is killing me. We don't need no smoke, no dancers and those things because we real like that," he said resulting in huge cheers of support and peals of laughter from the audience, and an immediate stoppage to the fog.

Apparently overjoyed at being on the Sumfest stage after years off it, Levy also belted out 21 Girls Salute a capella style before pausing to talk to the audience.

"This thing name dancehall, there is nothing wrong with it. We just have to clean it up and be more original," he said before adding My Woman.

"I have to sing 10 albums in 45 minutes," he told the audience before launching into Too Experienced, Young fresh and green and Black Roses.

Levy was in the middle of a rendition of Revolution which he said was in honour of the late Dennis Brown, when stage manager Worrell King attempted to get his attention, indicating he had surpassed his allotted performance time, of 45 minutes.

"I'm not finished. What is wrong with you people?" Levy asked the stage manager. Turning to the audience, he sang "Do you want more Barrington Levy?" The crown roared: "Yes".

The audience sang back: "No".

"Long time you don't see Barrington Levy live. Mi jus a get warm, see di shirt still dry," he said, and proceeded to perform for an additional five minutes, closing with Big and Broad, ending with a triumphant "a me teck di 'S' offa Superman chest".

The first word out of his mouth was "Jamaica!", after which he delved into some lesser-known recordings.

Five minutes later he was drenched with sweat, and after ten minutes he sent media personnel scampering and shielding their cameras, as he sprayed them with champagne.

Flo Rida's set was a high-energy one, and it was evident he came to do his best to please and engage his audience as much as he could, just as he had promised during a press conference the day before.

When he sang Where Them Girls At, he handed out red roses to the ladies at the front of the stage, and even invited some onstage for him to serenade them for a few minutes, before going on to chant his popular hit single, Low, before capturing some new fans with the uptempo Party Rock.

Obviously enjoying himself, he did Whistle before his final song of the night Wild Ones. During the performance of that final song, he came offstage and, perched on the shoulders of his bodyguard, joined the crowd singing, shaking hands and smiling.

One band change later, and the maestro Beres Hammond hit the stage in what was to be a solid one-hour performance, which saw him belting out close to 30 hits, including Step Aside Now, She Loves Me Now, Full Attention, Double Trouble, and Putting Up Resistance. The audience, by this time was his.

Close to the end of his performance, Hammond summoned fellow superstar Shaggy for a cameo performance of their new single Fight This Feeling before closing with Can you Play Some More.

Shaka Zulu Pickney, Tarrus Riley was not to be outdone.

Following on the heels of Hammond at 4:47 a.m., it was a sweat-drenched, obviously physically fit Riley that ruled the stage in the wee hours of the morning.

Of course the receptive reggae-lovers sang like a choir along with him as he did classics such as Lion Paw, Human Nature, Battlefield, She's Royal and Good Girl Gone Bad and a myriad of others.

An hour later the diminutive Jah Cure, who was scheduled to close the show showed his mettle as he kept the ladies swooning to love melodies such as Unconditional Love, When I Find That Girl as well as Only You, satiating the appetites of the fulfilled reggae lovers.