King forever and a day 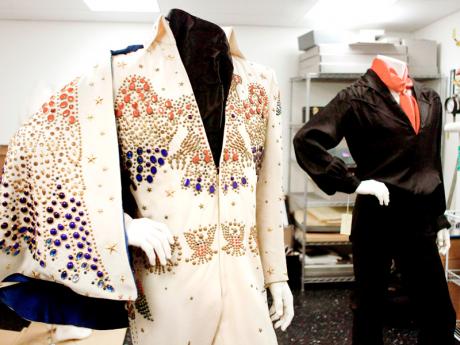 A suit from 'Aloha From Hawaii' worn by Elvis Presley (left) and the suit from his comeback special, are seen in a storage room at the Newseum in preparation for their exhibit about Presley in Washington, on Tuesday, March 9.-AP 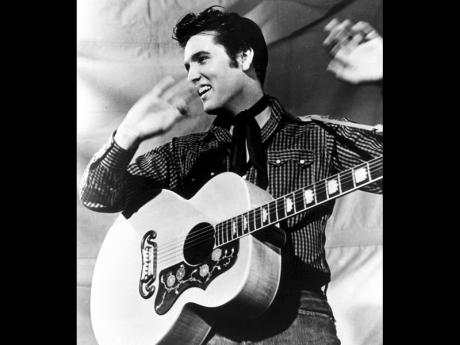 Many musicologists tend to agree that the uptempo style of rock and roll is a fusion of white hillbilly or rockabilly country music from the southern, hilly regions of the United States, and rhythm and blues, created by black artistes like Louis Jordan, Roscoe Gordon and Joe Turner.

Rock and roll entered American music some time during the mid-1950s and quickly became the predominant beat at the time. Of the many black and white artistes to have joined the rock-and-roll explosion, perhaps two of the better known were the Negro, Chuck Berry, and the Caucasian, Elvis Presley. Interestingly, Chuck Berry, who was considered the first black rock-and-roll guitar hero, fooled many at the outset into believing that he was white, while the white Presley, similarly fooled many into believing he was black, when he was heard on his first set of recordings in July 1954.

Presley's 'black' style and sound, seemed to have been greatly influenced by his regular attendance at shows put on by black artistes, during his teenage years.

Embracing black music from that age, Presley regularly attended gospel concerts at Memphis' Ellis Auditorium and frequented a black nightclub to catch a jazz-blues group named Pineas Orchestra. After exhibiting such early musical leanings, it became difficult to understand certain alleged derogatory statements made by him about the black race. It earned him their wrath, and the loss of miles of musical mileage.

Nonetheless, Presley's achievements, viewed from a mere musical standpoint, are unmatched in the history of the entertainment business.

The situation becomes even more befuddling when one considers that Presley's early life and upbringing were grounded in poverty, having been born into a poor sharecropping family in the rural south of the United States of America, which saw his depression-scarred father working odd jobs in a struggle to feed his family.

Hoping for a better life, Presley's father (Vernon) moved his family 90 miles north to Memphis, when the younger was just entering his teenage years. There, Elvis became hooked on the music being played on the Memphis radio stations by pioneering black artistes.

Presley's earliest musical exposures came from the Church, where he absorbed white gospel; from school, where he entered a talent show at age 10; and from his R&B-influenced black neighbours in Mississippi, where he was born on January 8, 1935.

The white hillbilly country music from the surrounding regions, which was mentioned earlier, was also an important ingredient, in this big 'melting pot' that moulded Presley's character. Although he was not the first to record uptempo rock-and-roll songs, he was certainly the first to assertively fuse country and blues music into a style called rockabilly. Joining rockabilly with R&B, gospel, and pop, a unique brand of rock and roll was formed. That form took the world by storm in the mid-to-late 1950s.

His influence was felt as far as homeland Jamaica, where his recordings not only rocked dancehalls and sent dance fans into wild hysteria, but also helped to shape Jamaican music in its embryonic stages.

His incredibly powerful vocal range, coupled with his explosive and sexual stage acts, were unprecedented in rock music, and indeed set the standards for the music's image.

Presley's inclination to record music was first triggered by a desire to record two songs as a belated birthday present for his mother. To this end, he wandered into Sam Phillips' Sun Recording Studios, on a certain day in 1953. Phillips wasn't impressed then, or when the young 18-year-old tried again in January 1954.

But when Presley returned in July of that year and auditioned with a song called That's All Right Mama, Phillips was convinced that he was the white boy singing black music he was looking for in order to make a fortune.

The recording became Presley's first single and a local hit that had radio listeners assuming that the singer was black. His follow-up recordings for the label also sold fairly well, the last of which, Mystery Train, climbed to No. 1 on the national country charts. By late 1955, Phillips sold Presley's contract to the influential Radio Corporation of America (RCA), a most decisive step in the development of rock music.

History was now in the making. In a 20-week blitz between February 10 and July 2, 1956, Presley witnessed his first four recordings for RCA (Heartbreak Hotel, I Want You, I Need You, Hound Dog, Don't Be Cruel) go to No. 1 on the United States chart.

He was, again, at the top of the charts in the following month (August) with Love Me Tender, the title of his first movie. He then occupied the No. 2 position with Love Me, recorded on September 1 of that year, before returning to his No. 1 spot with a quadruplet of hits (Too Much, All Shook Up, Teddy Bear and Jailhouse Rock) in a near-eight-month period from September 2, 1956, to April 30, 1957.

In a career spanning 20 years, in which Presley also starred in several movies, he had 18 No. 1 hits, nine of which were consecutive.

Although rock and roll proved the highlight of Presley's career, he was equally adept at pop and ballads. He had several, like Are You Lonesome Tonight, Can't Help Falling In Love, The Wonder Of You, and perhaps demonstrated this best in one of music's most sentimental songs, when he croons:

'It's now or never, come hold me tight,

kiss me my darling, be mine tonight,

Tomorrow may be too late,