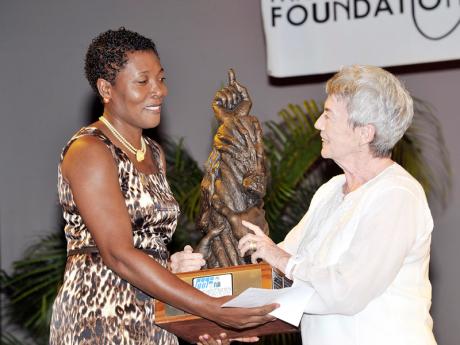 Just months after its remedial programme was shut down, Children First is celebrating a famous win - the Michael Manley Foundation (MMF) Award for Community Self-Reliance.

The announcement was made at the annual awards event held at the Little Theatre yesterday. Children First, which spawned from the Save The Children Fund (UK), started in Spanish Town, but has branched into Old Harbour, areas of Kingston, and as far as St James. In 2010, Children First also won the Environmental Foundation of Jamaica (EFJ) Award for its work in child survival and development at that year's MMF awards.

An elated Claudette Pious, executive director of Children First, said the award was "a celebration of the commitment of the people who believe in the work". She said the $200,000 cash grant would go towards assisting the completion of the sustainability project.

"That is the cyber centre, and the ornamental-fishing programme," she said. "So we're going to see how far we can get with that." The remedial programme was later bolstered by aid from the Jamaica National Foundation, but Pious said there were still issues, as the programme accommodates more than 100 children.

"In order to meet the demand based on the numbers we have, we're hoping we can get some support," she said. "We are well aware of the resources challenges." She noted the support didn't have to be in the form of cash.

"It's more about tangible things that we need, and service," she said. "So if I can get a teacher to come for three hours a day, for example, it's that kind of support [we need] to make sure it happens." Pious said she would also seek help in strategic planning as the organisation looks to its future.

The other big winner at yesterday's awards was the Youth Empowerment for Survival Programme. More popularly known as S-Corner due to the geography of the street it was founded on, the organisation took the EFJ Award. The other shortlisted entities for the top honours were Triple Eye Incorporated of Trelawny and the Mile Gully Women's Egg Production Project in St Mary. Head judge Horace Levy noted the four were pared down from eight applications from four parishes.

In order to meet the demand based on the numbers we have, we're hoping we can get some support.