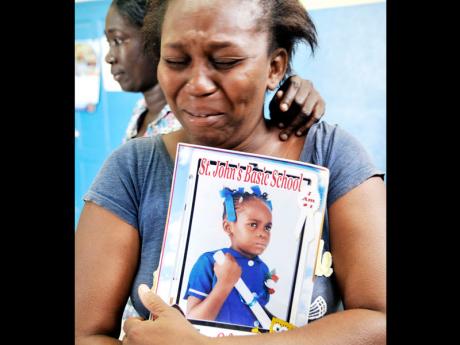 Yahola Anderson hugs a photo of her 11-year-old daughter, Tashanique James, who was shot and killed by gunmen in Denham Town on Emancipation Day. - Norman Grindley/Chief Photographer

THE TEARS meandered slowly down her face as Yahola 'Teesha' Anderson asked the question that so many Jamaican mothers have asked in recent times when their child has been killed: "Why?"

"How dem could just fire shot so and tek mi baby life? She don't even live no life," Anderson lamented to The Gleaner yesterday as she reacted to the fatal shooting of her 11-year-old daughter, Tashanique James, in the west Kingston community of Denham Town on Thursday.

The youngster, who everyone knew as 'Dana', was one of five persons shot in two gang-related incidents in the community while Jamaicans marked Emancipation Day.

Another victim, a 12-year-old girl, was treated at hospital and released.

Less than 24 hours after that shooting, Anderson was headed to the morgue for another look at the lifeless body of her daughter, the Clan Carthy Primary student who was headed to grade six with big plans for her future.

"No care how you are sad, Dana always made you laugh," said Anderson, with the only hint of a smile for the entire time she spoke with our news team.

"She try her best because she always wanted to be on top. She was a shining star in everybody's life, no matter who you be. Everybody loved her, even the police dem who come in the area.

"Dana was this happy little girl who did a little track and field. She come first in the class and she get prize for most industrious and most helpful," said Anderson as she remembered the second of her three children.

"The teachers had to ask her if a really west Kingston she come from because she was so intelligent," added Anderson.

Dana's aunt, Karen Anderson, was equally distraught as she and other community members remembered Dana, who placed second in a recent 4-H competition.

"Dana was an outspoken little girl, intelligent, and the one who would tell you what she wanted to be. She helped the other little ones to read, and it hurts to know we lost someone we love," said the aunt before her voice broke.

The police say they are maintaining a strong presence in the area as they search for Dana's killer.