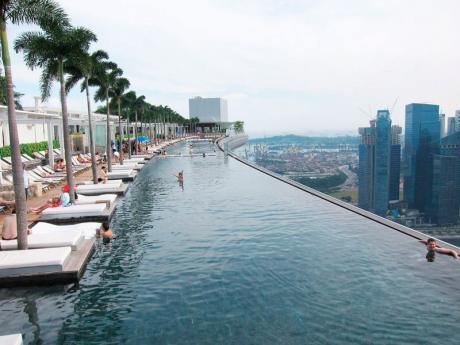 The rooftop infinity pool at the Marina Bay Sands, Singapore, a hot resort and casino, is the length of one and a half football fields. Singapore's economic progress has dwarfed Jamaica's even though the Asian giant was behind Jamaica in the early 1960s.-MCT

In two days' time, on August 6, we'll be 51. Three days later, on August 9, Singapore will be 48, marking the date when that country got expelled from the Malaysian Federation in 1965, having joined in 1963 after Independence from our common colonial master Britain.

We are not Singapore. And at this time of Independence celebrations, with the lamentations that we have not risen to their peak, nothing could be more indicative of the stark difference than the hue and cry about spending J$100 million (that is US$1 million!) on the celebrations. That princely sum is merely 16 times the per-capita gross domestic product (GDP) for Singaporeans, at US$61,700, the seventh-highest in the world, but it is 108 times the per-capita GDP for Jamaicans, at US$9,300.

Standing at the start of the decade of the 1960s, the colony Jamaica had far more advantages than colony Singapore. Jamaica, just under 11,000 square kilometres, had agriculture, bauxite, a growing tourism industry, budding manufacturing and services, and a settled, peaceful society.

Singapore, a group of small islands adding up to a mere 697 square kilometres, smaller than a Jamaican parish, was basically the main British naval base in East Asia and having the largest dry dock in the world then.

When Singapore became independent from Britain in 1963, most of the new Singaporean citizens were uneducated labourers from Malaysia, China and India. Many of them were transient labourers who were seeking to make some money in Singapore and they had no intention of staying for good. The GDP per capita was around US$500, much like ours. The migrant labourers' loyalty was mostly with their home countries of Malaysia, China and India.

After independence, the process of crafting a Singaporean identity and culture had to begin. But race riots broke out in 1964 and again in 1969 in that multi-ethnic society.

Singapore now has 5.4 million people packed into an area a little larger than St Mary, a little smaller than St Thomas. With no natural resources, except its harbour - and fish - and one of the highest population densities in the world, Singapore has become "one of the world's most prosperous countries with strong international trading links (its port is one of the world's busiest in terms of tonnage handled) and with per-capita GDP equal to that of the leading nations of Western Europe", as the CIA Fact Book describes it.

Singapore has a highly developed and successful free-market economy. It enjoys a remarkably open and corruption-free environment, stable prices, and a per-capita GDP higher than that of most developed countries. The economy depends heavily on exports, particularly in consumer electronics, information technology products, pharmaceuticals, and on a growing financial services sector.

Singapore is the 14th-largest exporter in the world and the 15th-largest importer with a very healthy balance of trade. In 2012, exports stood at US$435.8 billion and imports at US$374.9 billion. This has helped the country to hold the 11th-largest foreign reserves in the world. Real GDP growth averaged 8.6% between 2004 and 2007. As a result of the global financial crisis, the economy contracted a mere 0.8% in 2009, but rebounded 14.8% in 2010, on the strength of renewed exports, before slowing to 5.2% in 2011 and 1.3% in 2012, largely a result of soft demand for exports during the second European recession.

The country is the world's fourth-leading financial services centre. The 2011 Index of Economic Freedom ranked Singapore the second-freest economy in the world after Hong Kong.

On the Corruption Perception Index put out by Transparency International, Singapore consistently ranks as one of the least corrupt countries.

Foreign direct investments have loved this little tiger because of the low-corruption environment, low tax rates, advanced infrastructure, skilled workforce, and of, course its location. There are more than 10,000 multinational corporations in Singapore in all sectors of the economy. The country has a AAA credit rating from all three major credit-rating agencies.

While the country's public debt stands at 111 per cent and ours at around 150 per cent, the reasons are very different. "For Singapore, public debt consists largely of Singapore government securities (SGS) issued to assist the Central Provident Fund (CPF), which administers Singapore's defined contribution pension fund; special issues of SGS are held by the CPF, and are non-tradable; the government has not borrowed to finance deficit expenditures since the 1980s."

For Jamaica, the "onerous public debt burden is the result of government bailouts to ailing sectors of the economy, most notably to the financial sector," the CIA Fact Book says. "Debt-servicing costs ... hinder the government's ability to spend on infrastructure and social programmes, particularly as job losses rise in a shrinking economy.

"The [government] faces the difficult prospect of having to achieve fiscal discipline in order to maintain debt payments, while simultaneously attacking a serious crime problem that is hampering economic growth. High unemployment exacerbates the crime problem, including gang violence that is fuelled by the drug trade.

"As of late 2012," the Fact Book notes, "the ... government was working to negotiate a new IMF standby agreement to gain access to additional funds."

So how did Singapore manage to so outpace us, and outpace its neighbours and virtually all the countries of the world which came to independence at that time? Clearly, there is an element of timing which cannot be repeated. As Shakespeare had Julius Caesar say:

There is a tide in the affairs of men.

Which, taken at the flood, leads on to fortune;

Omitted, all the voyage of their life

Is bound in shallows and in miseries.

On such a full sea are we now afloat,

And we must take the current when it serves,

Or lose our ventures.

Location and the large British naval base would have provided some advantages. But we have not been exactly short of our own advantages, including location.

Undoubtedly, good governance with continuity was a critical factor in the Singapore success story. One political party, the People's Action Party, has won every election since self-government in 1959, and there have only been three prime ministers. Singapore built and stuck to a free-market, meritocratic, business-friendly economic system which pulled in foreign direct investments on a scale not likely to be repeated in any other country any time soon. There was strong fiscal discipline and an orderly society; some would say a regimented society.

Flogging is a routine punishment in Singapore. The death penalty is mandatory not only for murder but for drug trafficking and certain firearm offences. Amnesty International has complained that Singapore has "possibly the highest execution rate in the world relative to its population," and has said that some legal provisions conflict with the right to be presumed innocent until proven guilty.

Social behaviour is highly regulated and deviations ruthlessly punished. In a recent year, there were only 18 murders in a population of 5.4 million, and all cases except one solved. The Singapore prison population is high: some 16,000 in 5.4 million, compared to about 4,000 in our 2.7 million, or twice ours per 100,000.

Singaporean media have been criticised for being too regulated and lacking in freedom by press-freedom groups such as Freedom House, with much of the ownership tied to the government. Reporters Without Borders, in 2010, ranked Singapore 136th out of 178 in its Press Freedom Index.

Joblessness in Singapore, when the whole world is struggling out of economic recession, is 1.9 per cent. Officially, we are at 14 per cent, not counting the high level of underemployment and those who have dropped out of the job market altogether. Like the Cayman Islands, a Jamaican dependency up to 1962 but opting to remain a British colony at our independence, 44 per cent of the labour force in Singapore is non-Singaporean.

First Prime Minister Lee Kuan Yew, governing between 1965 and 1990, defanged the trade unions in the drive to open up the country for foreign direct investments. As useful as the trade unions might have been here in championing worker rights in the bad old days, the alliance of unions and political parties has done a great deal to hinder the transformation and modernisation of the Jamaican economy through the introduction of innovations and processes for increased productivity.

The workweek in Singapore is 44 hours long. Vacation leave runs from seven to 14 days.

Singaporeans are a highly disciplined, orderly, productive, educated - and some would say, regimented people - in a low-crime, low-corruption society with fewer than 1,000 out-of-marriage births per year in a population of 5.4 million.

We are not going to become a Singapore 2. But surely we can use the next few years to firmly take several Singaporean steps compatible with our culture and values to create a richer, more peaceful and more equitable society. And we don't need a GDP per capita of US$61,000 and an over-regimented society to achieve this.

People who are cautious of any carte blanche adoption of the 'Singapore Model', like some of the business leaders in that Leaders-to-Leaders Forum on July 23, are not as backward and pig-headed as a castigating newspaper editorial the next day has suggested.