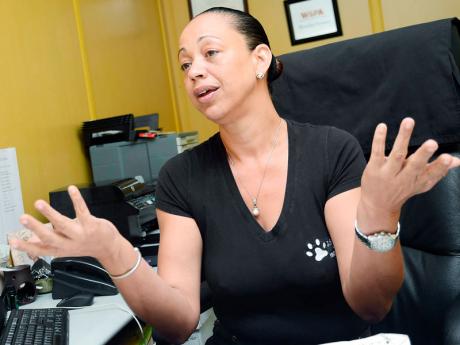 Karlene Craig of the Jamaica Society for the Prevention of Cruelty to Animals grooms one of the dogs up for adoption.-Rudolph Brown/Photographer 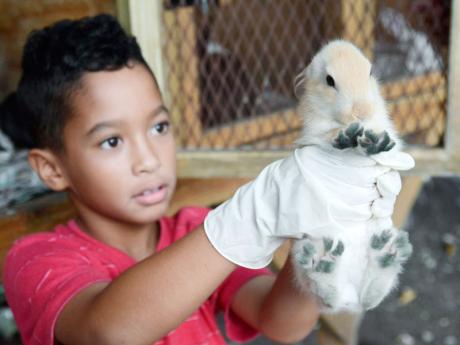 Young James Wemyss-Gorman shows off one of the several rabbits now being housed at the Jamaica Society for the Prevention of Cruelty to Animals. 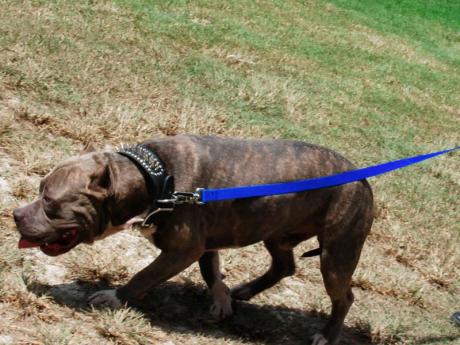 The island's main entity for the protection of animals is facing a race against time to find a new home, as the Government has given it notice to leave the Winchester Road property it has called home for more than 20 years.

The Jamaica Society for the Prevention of Cruelty to Animals (JSPCA) has rented the property almost in the heart of Half-Way Tree, St Andrew, from the Government for a peppercorn rent for years.

But now the State wants the prime real estate for development.

"We were given notice years ago but we have been unable to find a place, so now the Government has taken us to court, and we know that it is not if or but, it's when we will have to leave," said Pam Lawson, managing director of the JSPCA.

"I gather that the property is slated for sale and the JSPCA cannot afford to purchase it, so we are not an option," added Lawson, as she admitted that the Government has been generous to the entity by allowing it to remain years after the decision was first made to sell the property.

"I totally understand the Government's position. It's economics, isn't it? There is no sense being bitter," Lawson told The Sunday Gleaner.

West Kingston not an option

Now the JSPCA, which houses approximately 200 animals at any given time, is desperately searching for a new property to set up shop, and moving back to a place it owns at the corner of Collie Smith Drive and Spanish Town Road in west Kingston is not an option.

"The JSPCA is not something that you can pick up and move overnight on a few square feet of land. I need space for the more than 200 animals, as we operate a shelter, a hospital and a little boarding for people who might be going overseas, or who are elderly and cannot care for their animals."

The search for a new home has caused Lawson to learn the location, size and price of almost every property put up for sale in the Corporate Area.

But two major issues have prevented the JSPCA from making a purchase.

"When I look for somewhere, it has to be zoned as a commercial property, but then that pushes the prices up. You would not believe there is a recession when you hear the prices.

"When somebody says US$1 million-plus, I just have to say, 'really, I don't live in the US'," declared Lawson with a familiar chuckle.

"I don't have a hope in hell of affording half of that. But we are looking. We have a little nest egg as we knew this day would come."

According to Lawson, the JSPCA is searching for a commercial property about one acre in size and at a reasonable price, but that is proving difficult in the Corporate Area.

"People have said why don't you look in St Catherine, like out at Ferry, but my question is, 'will my paying customers come?' On a Saturday we get over 100 humans registering and they will have several animals. We consider ourselves the KPH (Kingston Public Hospital) of the animal kingdom."

Lawson noted that the JSPCA is called on to remove animals from boarding schools, hospitals, children's homes and other places at no cost to these entities.

In addition, persons will just dump injured or aged animals over the fence at the Winchester Road property.

"We don't turn anyone away regardless of their ability to pay. We get in easily 70 to 100 animals a day.

"These are just brought in injured, abandoned or whatever. Where would you like me to put all those animals? We will be euthanising them, and putting them in the freezer, then I have to pay to have them taken away."

This is done at a price, but the entity understands the financial constraints of these state agencies so no effort is made to extract the full economic cost.

Now the JSPCA is praying Jamaica will come to its rescue, but the entity is not seeking handouts or donations.

"If people can identify a property, something that is not going to bankrupt the BOJ (Bank of Jamaica). We don't want anybody to give us something for nothing. We are willing to pay our way. We are only asking for help to find somewhere we can afford."