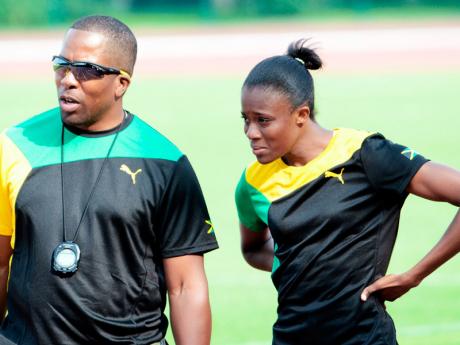 Danielle Williams (right) listens keenly as she and coach Lennox Graham makes an observation during training at the Luzhniki Sports Complex in Moscow on Tuesday. - Ricardo Makyn/Staff Photographer

Graham, a member of Jamaica's coaching team at the IAAF World Championships in Athletics, is also responsible for the conditioning of three athletes - 400m hurdler Leford Green, as well as 100m hurdles sisters - Danielle Williams, the national champion and Shermaine Williams, who also made Jamaica's Olympic team last year.

"I didn't share that concern that folks had about our female sprint-hurdling talent," said Graham, head coach at Johnson C. Smith University, responding to questions about where the country's next top sprint hurdler would come from.

"I knew there would be a change in the guard, I understand how fans look at it though. They need to see an immediate transition like they see in the sprints with so many people coming through.

"They needed to see that for the sprint hurdles, and it wasn't obvious, but I could see it and I think we are in for exciting times," Graham said.

Twenty-year-old Danielle Williams is the fastest Jamaican this year, with a time of 12.69. Additionally, six Jamaicans dipped under 13 seconds in the 100m hurdles final at the national championships and Yanique Thompson won gold at the IAAF World Youth Championships in Donetsk in a World Youth record 12.94 seconds.

Given those performances, Graham is convinced the island will continue to produce top-quality female sprint hurdlers.

"The results at the Jamaica national trials, with so many people going under 13 seconds, that came out of nowhere, because the season did not suggest that so many persons were going to run that fast and it's really exciting," Graham said.

"When you look at most of the active girls now, apart from Vonette Dixon and Andrea Bliss, you are looking at girls under 26 for the most part, so Jamaica has a huge future and, of course, we have youngsters who are knocking at the door too," he added.

"We just had a World Youth champion and World Youth record holder and others who are coming up - we have a lot of talent coming through in the sprint hurdles, no doubt about that."