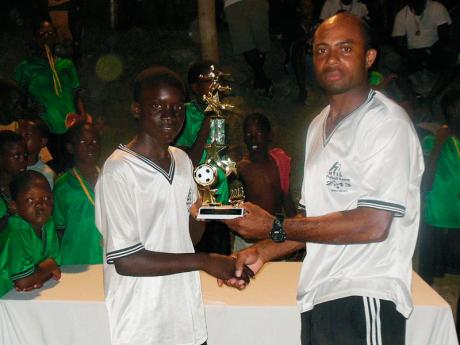 Damion Smith (left) being presented with his trophy by Robert Hemmings, president and founder of the non-profit organisation Help To Impact Lives (HTIL). Smith was one of the most outstanding player in this year's football camp for Barrett Town's youth.-Contributed

WESTERN BUREAU:The fifth annual football camp for the youth of Barrett Town ended successfully on Friday, July 26, after one full week of activities, and with over 100 participants aged 6-14.

The project has been making quite an impression in the St James community since its inception in 2009, acting as a springboard for many players who have gone on to represent their respective schools in the daCosta Cup football competition.

One such player is Cornwall College's Javier Palton, who has won a football scholarship to Johnson and Wales University in Florida.

The mission of HTIL is to make a difference in the lives of impoverished and less-fortunate youths, by providing them with essential resources to foster success through education and football.

"The camp was used to introduce the game to uninitiated students, while the more advanced players were put through a series of basic drills such as dribbling, controlling and passing of the football," said chief organiser, Robert Hemmings.

"This year's staging is by far the most successful for the amount of students coming out to participate across the different age groups," Hemmings noted.

On the final day of camp, over 120 pairs of football shoes (cleats and turfs) were handed out to the campers. Three all-star games (Under-10, Under-12 and Under-14) were played, with players receiving medals of participation.

Cornwall College's Under-16 midfielder, Damion Stewart, won the top award after being named Most Outstanding Student Athlete. He also took home cash award in the sum of US$200 towards the sitting of his nine CXC subjects next year.