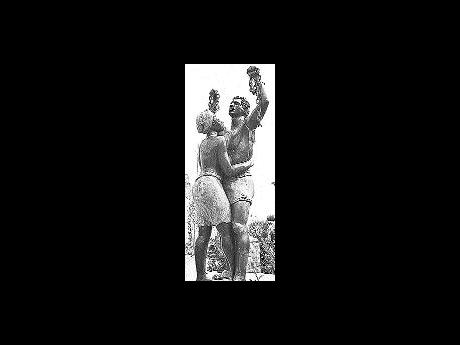 A slavery monument in Senegal. - Contributed 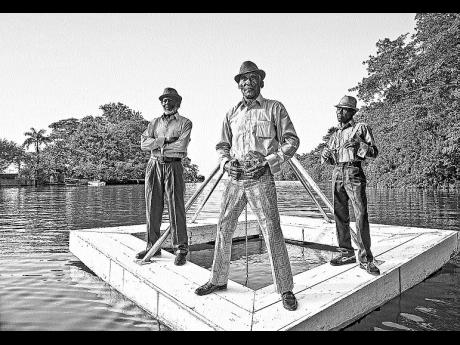 The Jolly Boys are an example of more recent forays into mento music.
1
2

Above all, music has been known to act as an instrument of unification among nations. Noted writer Henry Wadsworth Longfellow (1807-1882) was right when he said, "Music is the universal language of mankind".

Music was a unifying instrument when it was used by African slaves in the British West Indies in the years preceding their emancipation. It was indeed the common language used by them to communicate, since gatherings and idle chatter was not permitted, as slave owners felt that this could lead to revolts.

Utilising the drum as their main instrument, along with African chants brought with them from Africa, slaves were able to exchange messages among themselves in ways whites could not understand.

This augured well for their efforts to extricate themselves from the shackles of slavery during the build-up towards emancipation at midnight on July 31, 1834 and total freedom four years later.

Music thus became an effective tool in their efforts to unite, incite unrest, and create revolts.

Despite the many lives sacrificed through revolt, the music, with its attendant spin-offs, placed additional pressure on white slave owners and, in no small way, hastened the coming of emancipation in 1838.

On most of the islands in the Caribbean, and particularly in Jamaica, white slave owners, or slave masters, seemed very musically inclined and sought to create entertainment for themselves by utilising the talent of slaves.

Using home-made drums, bamboo flutes, a horse or donkey jawbone, with a spoon or fork drawn against a grater, musical slaves created an orchestra of sounds that gave the earliest glimpse of what would become known as mento.

Some slaves were taught to play European musical instruments like fiddles and fifes, and the European dance and rhythm, 'the quadrille', which arrived on plantations via slave owners.

Soon, those European instruments would became a part of the concoction, insofar as it relates to the shaping of mento.

The concoction created a uniquely Jamaican sound. The sweet honey-dripping sound that emanated from such primitive and crudely constructed instruments will forever remain one of the mysteries of the music business.

Other indigenous European melodies, music and dance were taught and sometimes played alongside original African retentions. But on the whole, the music managed to remain highly Africanised, and dominated recreational life on the plantations.

Many of the slave masters were deceived into believing that the sole purpose of the slaves' performances was to provide entertainment for them.

So with all of that, the music emanating from the plantation systems in Jamaica really did more than just assist with hastening emancipation. It became the main foundation on which mento or mento calypso - Jamaica's first commercially recorded popular music - was built.

Commonly referred to as mento calypso, the genre bore some slight resemblance to Trinidadian calypso, but was distinctly different in beat.

Mento also holds pride of place as being Jamaica's most indigenous popular music, setting itself apart, by virtue of having its root in Jamaica.

All other forms of popular Jamaican music, (boogie, ska, rocksteady, reggae, etc.) with perhaps few exceptions like The Folks Brothers' Oh Carolina and the Mellow Cat's Rock A Man Soul, were adaptations of the American R&B and boogie.

A tourist's first experience to live music in Jamaica would probably be by a mento band, whether it be at the airport, a hotel's poolside bar, or on a cruise ship docked in the harbour.

One of the interesting features of the early mento period was thepractice of singers giving themselves titles which placed them on equal levels with their slavemasters.

It was not uncommon to hear such individuals referring to themselves as Lord, Duke, Count, Prince, King and so on.

The practice would continue down the years and into the late 1940s and early 1950s when mento music was at the zenith of its popularity in Jamaica.

Arriving on the scene then were colourful characters like Count Lasher, Count Owen, Lord Power, Lord Beginner, Lord Creator, Lord Laro, Lord Flea, Lord Lebby, and many others who decorated their persona in that way.

Most mento lyrics at the time were humorous social commentaries about events taking place or conditions that existed at the time. Hubert Porter, for example, related the plight of tenants living in poor conditions, especially during rainy weather:

Some of them, the room is so small,

You can't turn around in them at all.

When you want to turn around

You've got to go outside

Then you turn your back and reverse inside.

Count Lasher, perhaps the most popular mento singer, was best remembered for The Talking Parrot and Water The Garden, while the Chin's calypso sextet highlighted the very popular Big Boy, asking the ambiguous question, - What is catty?

That particular piece and many others demonstrate the writing skills of one Everard Williams, a school teacher, who wrote some 80 per cent of mento hits for various singers during the period.

Alerth Bedassee, the very popular lead vocalist of Chins Calypso sextet, described Williams as "a genius who could write a song about an event in glowing and flowing poetry in virtually no time".